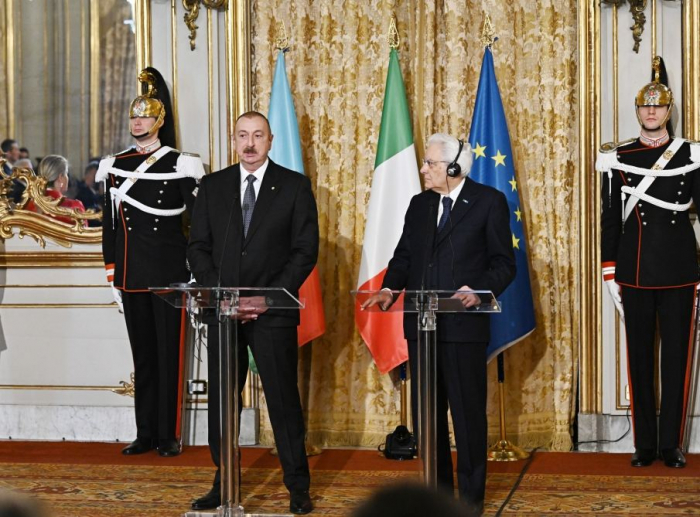 Azerbaijan has confirmed its reputation of a reliable partner, Azerbaijani President Ilham Aliyev said while making a press statement together with President of the Italian Republic Sergio Mattarella.

“With regard to energy issues, Azerbaijan is Italy’s main supplier of crude oil,” the Azerbaijani president noted. “Azerbaijan accounts for 17 percent of crude oil consumption in Italy. For almost 15 years, Azerbaijan has been exporting crude oil to Italy, and there were no problems or force majeure circumstances over this time. So Azerbaijan has confirmed its reputation of a reliable partner.”

“There is cooperation with five other countries located between us, so in total there are seven countries involved,” the Azerbaijani president said. “This cooperation will also have a positive impact on the energy and all other areas, because these countries are closely connected with each other. After this, the development of political, economic and cultural ties between these countries will go even faster, of course.”

“The Southern Gas Corridor is a historic project, and I would like to express my deep gratitude to President Mattarella for the efforts made because during an official visit to Azerbaijan in July 2018, Mr. President and I talked about this,” Ilham Aliyev noted. “After that conversation, the implementation of TAP went faster, and we are currently at the final stage of the project.”

“The relations between NATO and Azerbaijan are developing successfully,” added Ilham Aliyev. “Many years ago, we sent our troops to Afghanistan. Azerbaijan is actively involved in peacekeeping operations. We are providing very important logistical and transport services to NATO forces. Given the very favorable geographical location and transport infrastructure of Azerbaijan, we are successfully cooperating in this area.”

“So all the questions and thoughts that have been voiced clearly show that strategic partnerships and friendly ties have been established between our two countries, and these ties will successfully develop in the future,” said the Azerbaijani president. “Thank you!”