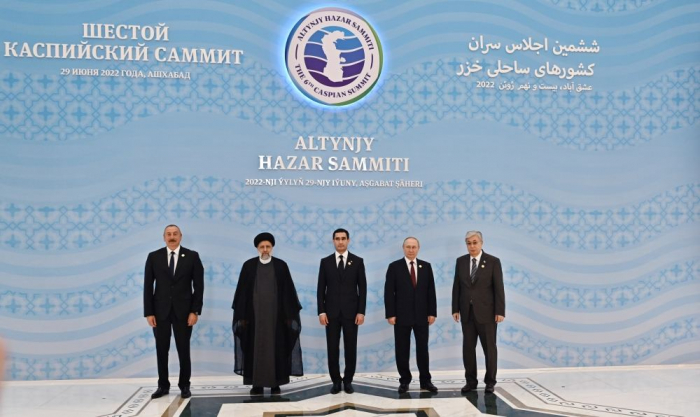 The 6th Summit of the Heads of State of the Caspian littoral states has been held in Ashgabat.

President of Turkmenistan Serdar Berdimuhamedov welcomed President of Azerbaijan Ilham Aliyev and other heads of state.

The presidents posed together for official photos.

The heads of state then held a meeting in a limited format.

An expanded meeting on the sidelines of the Summit then was held.

Opening the Summit, President of Turkmenistan Serdar Berdimuhamedov gave the floor to President of Azerbaijan Ilham Aliyev and said:

We continue our meeting in an expanded format. It is with deep respect that I would like to give the floor to His Excellency Ilham Heydar oglu Aliyev, President of the Republic of Azerbaijan. Please.

President Ilham Aliyev made a speech at the meeting.

Dear heads of state, dear participants of the Summit.

First of all, I would like to express my gratitude to Serdar Gurbangulyevich Berdimuhamedov for the hospitality and a high level of organization of the 6th Caspian Summit.

Our meeting coincides with the birthday anniversary of the former President of Turkmenistan, my dear friend and brother, Chairman of the People’s Council Chamber of the National Assembly of Turkmenistan, Gurbanguly Malikgulyevich Berdimuhamedov. Under his leadership, fraternal Turkmenistan has achieved significant success in strengthening its independence, raising its authority in the international arena, increasing the well-being of the people and economic development. On my own behalf and on behalf of the people of Azerbaijan, I congratulate Gurbanguly Malikgulyevich and wish him good health, and well-being and prosperity to the fraternal people of Turkmenistan.

I take this opportunity to once again congratulate you, Serdar Gurbangulyevich, on your election to the post of President of Turkmenistan. I am sure that under your leadership Turkmenistan will achieve further successes.

Azerbaijan attaches great importance to the interaction between our countries in the Caspian Sea. The Convention on the Legal Status of the Caspian Sea signed in Aktau in 2018 is of historic importance. The document crowned many years of work and determined the legal status of the Caspian Sea. Its early entry into force will create a solid legal basis for the adoption of even more effective measures aimed at further comprehensive interaction and cooperation between our states.

The legal framework of cooperation among Caspian littoral states is being strengthened. Agreements have been signed and entered into force in the areas of security, hydrometeorology, transport, conservation and rational use of aquatic biological resources, prevention and elimination of emergency situations, as well as other areas of mutual interest. New draft agreements on cooperation have already been initiated. They are under consideration and will be submitted for signing as soon as they are ready. Legally binding agreements on the delimitation of the bottom of the Caspian Sea have also been concluded in bilateral and trilateral formats. Friendly and good neighborly relations, bilateral and multilateral cooperation among Caspian littoral states, including those within the framework of the UN, the OSCE, the Organization of Islamic Cooperation, the Organization of Turkic States, the CIS and the Economic Cooperation Organization are an important factor in maintaining the stability and security of the Caspian Sea.

I am pleased to note that our interaction is based on the respect for the interests of all parties, respect for the sovereignty, territorial integrity, independence of Caspian littoral states and non-interference in each other’s internal affairs. The Caspian Sea is an important component of many international and regional projects aimed at improving the well-being of the peoples of our region. The key priorities of littoral states remain the desire to create favorable conditions for the development of mutually beneficial economic cooperation, improve the investment climate, create reliable and secure communications, and attract highly profitable and environmentally friendly technologies. An important area of cooperation is the development of transport infrastructure, improving the quality of transport services and multimodal transportation. The bilateral and multilateral agreements concluded among Caspian littoral states in the field of transport create a good basis for turning the Caspian Sea region into a major international transport hub with developed infrastructure.

Azerbaijan is one of the significant transport and logistical centers of Eurasia now. Our country plays an important part in the development of East-West and North-South international transport corridors. We are making effort to effectively use the Trans-Caspian International Transport Route. This will make it possible to use the transport potential of the Caspian littoral states to the maximum extent and contribute to the implementation of new projects for the development of transport infrastructure.

We are observing an annual increase in cargo transportation through the territory of Azerbaijan along the East-West and North-South routes. The volumes of transit cargo going through the new international trade seaport of Alat are increasing. The construction and commissioning of this port has become another important contribution of Azerbaijan to the development of transport and logistical infrastructure in the Caspian Sea. This year Azerbaijan also plans to hold the 8th meeting of the Coordinating Council of the North-South International Transport Corridor.

After the Victory in the Patriotic War and the resolution of the conflict with Armenia, Azerbaijan began to carry out large-scale work on the reconstruction and restoration of Karabakh and Eastern Zangazur, including the development of international transport links. The Zangazur corridor is already becoming a reality.

We share the concern of the littoral states about the current state of the environment. Azerbaijan is interested in expanding cooperation to solve the environmental problems of the Caspian Sea. The successful interaction of Caspian littoral states continues within the framework of the commission for the conservation and rational use of the Caspian aquatic biological resources. The Sixth Conference of the Parties to the Framework Convention for the Protection of the Marine Environment of the Caspian Sea is to be held in Baku at the end of this year. Today, at a meeting in a limited format, my colleagues and I exchanged views on an issue that causes particular concern, namely, the Caspian Sea becoming shallow. We have been observing this for many years and, unfortunately, the dynamics of the process is alarming. Therefore, we have already exchanged views and our delegations will probably continue to work in this direction in terms of creating special expert groups in order to identify the causes of such an environmental disaster and determine measures to prevent further the Caspian Sea from becoming shallower.

In conclusion, let me once again express my gratitude to the Turkmen side for the effective organization of our Summit. I am convinced that it will contribute to the consolidation of the efforts of Caspian littoral states aimed at resolving the important common tasks we are facing. Thank you.

President Serdar Berdimuhamedov: Thank you Ilham Heydar oglu for your informative speech and for your congratulations.