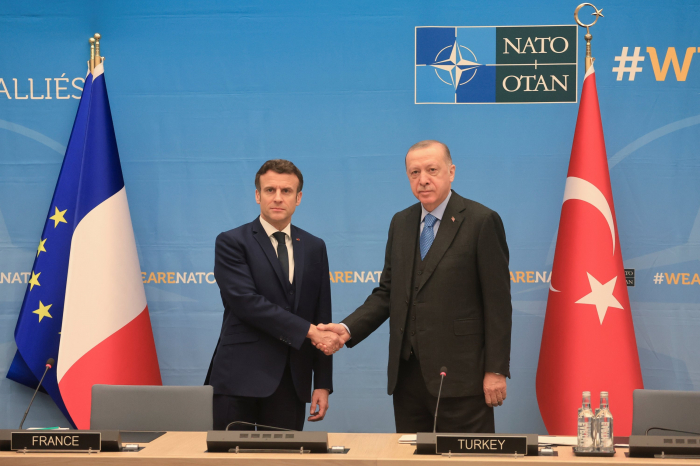 President Recep Tayyip Erdoğan and French President Macron discussed Sweden and Finland’s NATO bids, the Russia-Ukraine war and regional developments in a phone call, the Presidency’s Directorate of Communications said Thursday, according to the Turkish media.

Erdoğan told his French counterpart that Turkey wants immediate peace between Russia and Ukraine and that Ankara will continue to promote dialogue and diplomacy in this regard.

He also told Macron that Sweden and Finland’s contact with individuals and so-called institutions affiliated with the PKK terrorist organization’s Syrian offshoot YPG contradicts the spirit of the alliance under NATO.

On Wednesday, Swedish state TV SVT aired an interview with a PKK-affiliated terrorist ringleader in Syria.

Listed as a terrorist group by Turkey, the United States and the European Union – of which Sweden and Finland are members – the PKK has waged an insurgency against Turkey since 1984.

Tens of thousands of people have died in the conflict.

Among other things, Ankara claimed that Sweden had decided to provide $376 million to support the PKK’s Syrian offshoot, the YPG, in 2023 and that it had provided military equipment to them, including anti-tank weapons and drones.

Turkey echoed concerns over Swedish and Finnish countries’ support for terrorist groups during the meeting between Turkish officials on Wednesday.

Noting that the PKK, the YPG and the PYD are all same terrorist group, Turkey conveyed its expectations on this matter to the delegations from Sweden and Finland, Presidential Spokesperson Ibrahim Kalın told a news conference following the closed-door consultative meeting that lasted nearly five hours.

Sweden and Finland formally applied to join NATO last week – a decision spurred by Russia’s war on Ukraine, which began on Feb. 24.