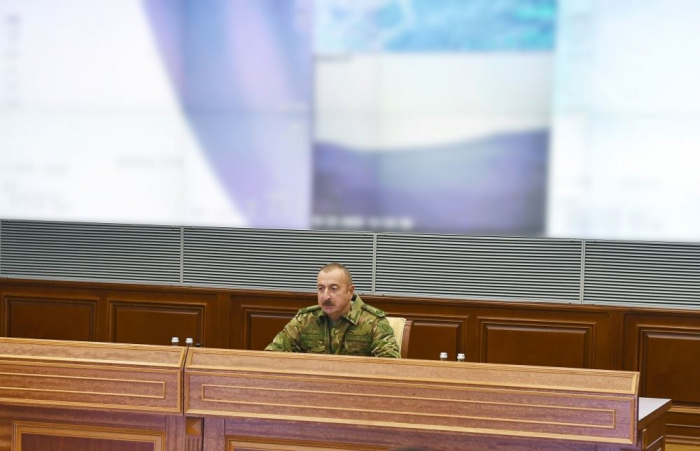 The war has been going on for about a month, and during this period, Azerbaijan has achieved great successes on the battlefield, said Azerbaijani President, Victorious Commander-in-Chief Ilham Aliyev.

The war has been going on for about a month, and during this period, Azerbaijan has achieved great successes on the battlefield, said Azerbaijani President, Victorious Commander-in-Chief Ilham Aliyev.

The head of state made the remarks at an operational meeting held Sunday at the Central Command Post of the Ministry of Defense with the participation of the leadership of the Defense Ministry and the commanders of the joint corps located in the frontline zone.

He noted that good news comes from the frontline every day.

“During the day, I am regularly updated about the operations carried out in the war zone and give relevant instructions. Almost every hour I receive information about events in different regions. The Ministry of Defense and other agencies keep me informed. Operational meetings are held every day,” the president said.

President Aliyev stressed that the situation is fully under control, and during this period, a part of Azerbaijan’s occupied lands has been liberated from occupiers.

The occupied lands and ruins are witness to Armenian vandalism, said President Aliyev, stressing that the Armenian state is responsible for these crimes and will be held accountable for them.

“I have ordered to conduct inspections in all liberated areas, to register all the destruction, to draw up acts, to register the destroyed property of our citizens. The Armenian state will definitely be held accountable for these war crimes. Once again, the whole world can see what kind of savages we are facing. Today, Azerbaijani soldiers and officers are teaching the enemy a lesson on the battlefield, are putting the enemy in its place, are driving the enemy out of our lands. We shed blood, we have martyrs – both among servicemen and civilians,” he said.

The head of state said Armenia cannot confront Azerbaijan on the battlefield and, as always, fires on civilian settlements.

“As a result of this cowardly shooting, more than 60 civilians have been killed and about 300 injured,” President Aliyev added.