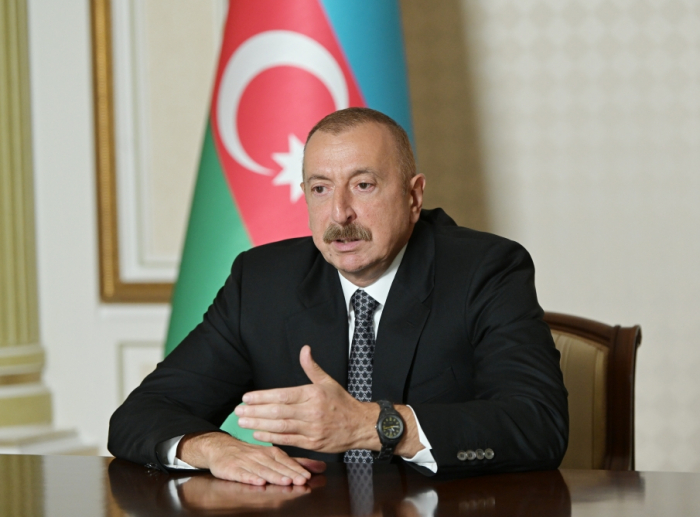 Therefore, the processes taking place in Armenia, including the statements by various political forces about the possibility of re-occupying a part of the internationally recognized Azerbaijani territory, statements reeking of revanchism, are very dangerous, of course, and first of all, for the Armenian side, Azerbaijani President Ilham Aliyev said as he received a delegation headed by Russian Foreign Minister Sergey Lavrov.

“I would also like to express my position in connection with what is happening in Armenia, in particular, the growing Azerbaijanophobia trends, which, in my opinion, are the only factor today that holds the government and the opposition in Armenia together,” he said.

The head of state noted that the anti-Azerbaijani hysteria has already crossed all boundaries, and it is completely unfounded.

“Some of the facts that took place in the region, which I have cited, are evidence of our intention, the intention to turn the page even though this is not easy to do for purely emotional and psychological reasons. Almost everything in the liberated territories is destroyed. International experts and journalists call Aghdam the “Hiroshima of the Caucasus”. There is not a single sound building in the city of Fuzuli. And while visiting the liberated territories, one can observe complete destruction. Houses, public buildings, religious monuments, more than 60 mosques, cemeteries, etc. were destroyed in the liberated territories during the occupation. Therefore, despite such devastating results of the occupation, the results we could not even imagine because we did not have access to these territories, Azerbaijan still demonstrates common sense and the need to think about the future,” the Azerbaijani president added.

“Therefore, the processes taking place in Armenia, including the statements by various political forces about the possibility of re-occupying a part of the internationally recognized Azerbaijani territory, statements reeking of revanchism, are very dangerous, of course, and first of all for the Armenian side because the second Karabakh war clearly demonstrated what this policy of hatred and Azerbaijanophobia had led to. Therefore, we very much look forward to continuing, in cooperation with Russia, our strategic partner, to work hard on normalizing the situation in the region. From the point of view of the military aspect, we can consider the situation to have already been normalized, but from the point of view of political, economic, transport and other aspects of future interaction, of course, there is a lot to be done. Naturally, we hope that Russia, as our friend, strategic partner, neighbor, as a country whose peacekeepers are currently in the territory of Azerbaijan, will continue to contribute to the reduction of tensions and the prevalence of a more sober approach on the Armenian side,” President Aliyev concluded.