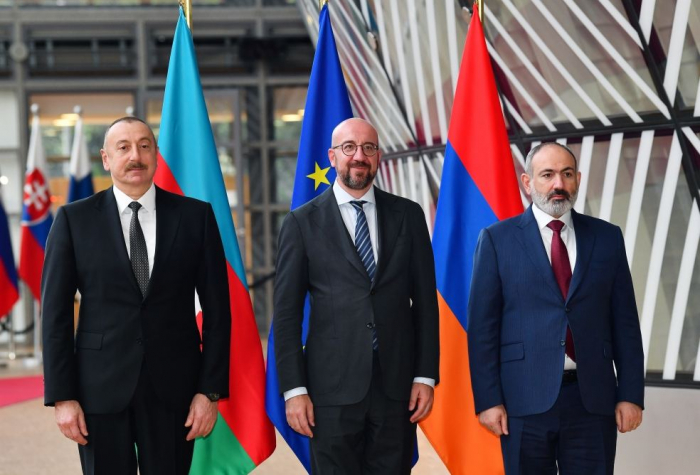 The trilateral meeting of President of the Republic of Azerbaijan Ilham Aliyev, President of the European Council Charles Michel, and Prime Minister of the Republic of Armenia Nikol Pashinyan in Brussels will have a positive impact on the future peace agreement, said Senior Policy Analyst at the European Policy Center Amanda Paul, according to Trend.

The sides agreed on the first session of the border commissions to be held in the coming days. The meeting will cover all issues related to border delimitation and regional stability.

Transit agreements have also been reached between the western part of Azerbaijan and the country’s Nakhchivan, as well as through the territory of Azerbaijan between different parts of Armenia. The leaders came to an agreement to proceed with opening transport corridors, as well as with the regulation of international transport.

The sides also decided to continue discussions on a future peace treaty between Armenia and Azerbaijan. In the upcoming weeks, delegations led by foreign ministers will continue the negotiation process.

“I think that the meeting with Charles Michel was very encouraging and that there was more substance in the press statement published by Michel than we have seen following earlier discussions,” Paul stated. “This was the third such meeting between Michel, President Ilham Aliyev, and Nikol Pashinyan. We can see the progress. There is much more substance being discussed and increasing commitments made to progress peace”.

As for her, one of these commitments was the first joint meeting of the Border Commissions, and to advance discussions on the future peace treaty.

“These steps may be small, baby steps but they should not be underestimated. Furthermore, the EU is now playing a central role in the post-war period, in terms of bringing about a peace deal, steps towards reconstruction, and long-term sustainable peace and reconciliation,” Paul added.

Read more:   Why UK report on 'digital gangster' Facebook is a thinly veiled call for censorship

“President of Azerbaijan showed the whole world that he is a true peacemaker. He spoke about the need to sign a peace treaty in the near future and did everything possible and impossible for this,” he said.

Finkel stressed that the mood in Armenia is completely opposite.

“We see that the Armenian society and the opposition, which has gathered thousands of protestors in Yerevan, are trying in every possible way to disrupt the signing of a peace treaty. Armenia doesn’t understand that the country has no other choice, and a peace treaty is the only thing that can lead Armenia out of the terrible economic, political and demographic crisis,” he said.

According to the expert, the Armenian side, having lost the war, may lose the diplomatic talks too.