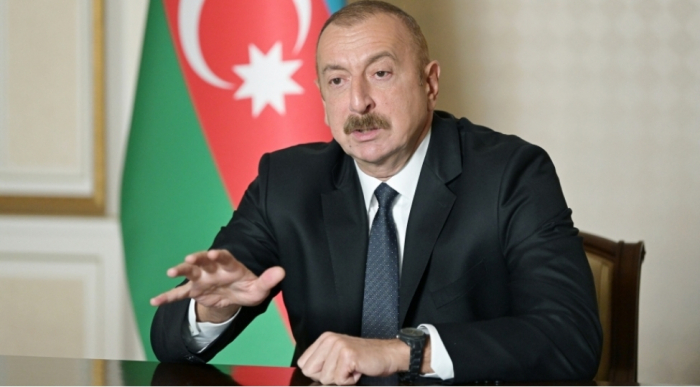 Armenia in the first place should withdraw any territorial claims against Azerbaijan and behave itself as a good neighbor, President Ilham Aliyev said in an interview with the French France 24 TV channel.

“No, in my statements you will never find any sign of territorial claims. What I was talking about, I was talking about historical truth and it’s a historical fact that in 1920 the Soviet government decided and did it actually, they separated an integral part of Azerbaijan – Zangazur and adjusted it to Armenia. It was 1920, 101 years ago,” the head of state said.

“You will never find in any of my speeches words like that. But at the same time we, as every other nation should know our history, our new generation should know its history, ancient history, and which territories we were living on and how to go back. And I am sure that we will go back but we will go back as I said many times, not on tanks. We will go back by cars, by trains, you know on foot. When situation normalizes, when peace agreement is achieved why shouldn’t we go back? It’s our legitimate right,” he added.

President Aliyev pointed out that Armenia has territorial claims against Azerbaijan. “They still claim that Nagorno-Karabakh, as they call it, do not belong to us. They still claim that either it belongs to Armenia, or it is a kind of an independent entity. But there is no Nagorno-Karabakh on the political and geographic map of Azerbaijan. This kind of entity does not exist. Therefore, Armenia in the first place should withdraw any territorial claims against Azerbaijan, behave itself as a good neighbor and we will respond adequately,” the head of state concluded.