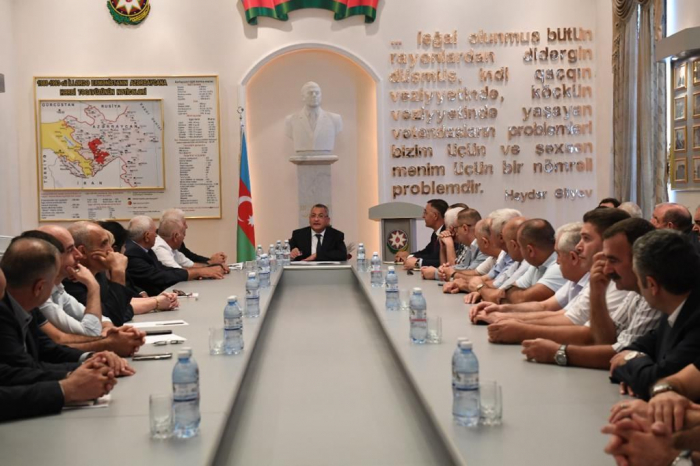 Implementation of the instruction of the Azerbaijani President Ilham Aliyev on preparations for the return of former IDPs from Azerbaijan’s Lachin district liberated from Armenian occupation to their native lands has begun, according to State Committee for Affairs of Refugees and Internally Displaced Persons (IDPs) of Azerbaijan.

For this aim, the committee held a meeting with a group of the former IDPs on August 16.

The meeting participants paid tribute to the martyrs, who gave their lives for the liberation of the country’s lands and the restoration of its territorial integrity, with a minute of silence.

During the meeting, the vandalism of the Armenians, who, leaving the settlements of Lachin district, where they settled illegally, set fire to houses and forests, was strongly condemned.

The former IDPs from Lachin expressed their gratitude to President Ilham Aliyev for comprehensive state care over the past period and for the realization of their dream to return to their native places.

Read more:   What is children's level of risk for coronavirus? Here's what you need to know

Besides, work done by First Vice President Mehriban Aliyeva to solve the problems of IDPs was emphasized during the meeting.

The meeting participants were provided with detailed information on the measures taken by the State Committee in order to prepare for the Great Return. It was once again noted that, by the instruction of the president, all necessary measures are being taken to ensure the safe return of citizens to their native lands.

At the meeting, an exchange of views took place on preparations for the return and organization of the move. The natives of Lachin city expressed their readiness to contribute to the social-economic development and the elimination of the consequences of its occupation.

The participants of the event gladly accepted the news of their upcoming return to Lachin.

One policeman killed and another injured during PKK attack in Turkiye, as terrorists blow themselves up

One police officer was killed, and another security guard was injured as a result of…