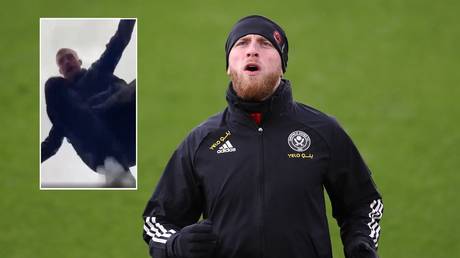 Footballer McBurnie was reportedly in the footage attacking a man. © Reuters / Twitter

Sheffield United’s Scottish international forward Oli McBurnie has reportedly been held in police custody after a video emerged which appeared to show the footballer attacking a man and smashing his phone to the ground.

Cellphone footage reportedly captured last Saturday night showed the 16-times capped international reacting angrily to a fan calling his name on the street, before the man – whom reports indicate is Sheffield United striker McBurnie – approaches the person filming and the phone falls to the ground.

The camera remained recording, however, and the dramatic footage appeared to show McBurnie assault the person with a series of knees and kicks before stamping on the phone on the ground.

Amid the melee, a voice is heard saying: “take your boy away now”.

McBurnie’s club, whose relegation was recently confirmed from the Premier League, indicated that they are aware of the footage and are conducting an internal investigation.

“Officials at Sheffield United are aware of the video circulating on social media and are currently investigating,” the club said.

And according to reports from British media, McBurnie has been arrested by North Yorkshire Police after the alleged victim, Elliot Wright, reported the incident to authorities leading to him being arrested on Monday evening and held in custody overnight.

“We were walking and I saw him arguing with this girl. I was with two of my mates and he was getting a bit aggressive and getting a bit loud,” Wright, 21, told The Sun.

“One of my mates has dragged him off me and him and the girl and another lad all walked off. He put his hood up and walked off.”

However, new footage posted to social media allegedly showed McBurnie being labeled “sh*t as f*ck” and taunted by a person behind the camera.

A new angle of the McBurnie incident has surfaced.It appears McBurnie was walking home with his Girlfriend when the young lad behind the camera filmed and harassed him.I’ve advised the club to take a look#twitterblades | #sufcpic.twitter.com/XOrX6fHv50

A statement from North Yorkshire Police stated: “A 24-year-old man from Knaresborough has been arrested in connection with an incident, which involved another man being assaulted.

“The 21-year-old victim sustained facial injuries during the incident, which happened shortly before 8.30pm on Saturday 8 May on High Street, Knaresborough.

“The 24-year-old arrested man remains in custody at this time. Anyone who witnessed the incident is asked to contact police.”

McBurnie had previously come to the attention of authorities last summer after he was fined £28,5000 and banned from the road for 16 months for drink driving.

In a separate incident last year, McBurnie was reminded of his responsibilities by Sheffield United and the club’s former manager, Chris Wilder, after he was pictured making obscene gestures in the crowd while watching the South Wales derby between Swansea City and Cardiff City.

Wilder is understood to have reminded McBurnie that his profile as a professional footballer means that he will regularly have cameras on him and that he must act in a manner befitting his status.

“We reminded him that he has a responsibility. He’s a footballer and with social media and cameras everywhere you can’t get involved. He must represent himself, more than anything, a touch better and he understands that,” Wilder said at the time.

“I think you’re always on camera now. The coverage the Premier League gets, it exposes everybody and it goes into everyone’s front room and we have a standard to set. I’m just so glad there weren’t cameras about when I was playing football!”

McBurnie managed to score just one goal this season as The Blades were relegated back down to the Championship, and just 7 goals in 65 appearances since joining the club in a £20 million deal from Swansea City prior to the start of last season.

His season was ended through injury last month and the 24-year-old now faces a race against time to be fit for inclusion in Scotland’s squad for this summer’s European Championships. (RT)