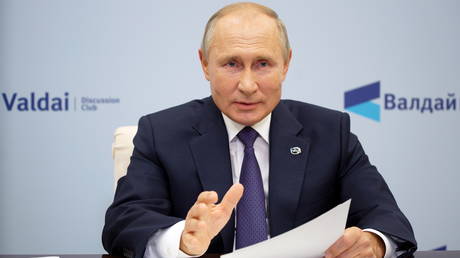 Western pundits use Vladimir Putin’s rejection of the idea of Western liberal democracy as a universal model to imply he rejects the concept of democracy outright. His latest comments reveal the reality is rather more complex.

On Thursday, the Russian president gave his annual speech to the gathering of the Valdai Discussion Club – a select group of Russian and foreign experts who meet once a year to ponder the fate of the world. The 2020 event, normally held in Sochi, was staged online, due to the Covid-19 pandemic.

Putin’s address, and his answers to the questions that followed, wandered far and wide. At times, he delved into specific details, but at other moments, his words were broad-ranging and philosophical. The speech therefore provides a useful tool for analyzing what one might call the ‘ideological foundations’ of latter-day Putinism.

Commentary in the international press has focused primarily on what Putin had to say about the global political order. This was, in reality, quite conservative. He distanced himself from the Valdai Club’s most recent report, which stated that international institutions were more of an ‘obstacle’ to the construction of a successful global system than a help. “I cannot agree with the assumption that the existing international structures must be completely rebuilt,” he said.

Instead, Putin argued in favor of “adjusting the international arrangement of world politics.” He also lent his support to regional multilateralism, in which interested groups of states work together to solve common problems outside of the global institutional framework.

As a vision of the world, it is hardly revolutionary, and certainly doesn’t justify the common complaint that Putin and the Russian Federation are hoping for the end of the post-Cold War liberal world order, consider that set-up irredeemable, and therefore wish to destroy it.

Also on rt.com A powerful & game-changing Russia/China military alliance is ‘quite possible’ in future but not on the cards yet, says Putin

In any case, foreign affairs took up only a small part of Putin’s speech, and were far from the most interesting of the topics under discussion. More revealing was what the Russian president had to say about the state, systems of government, and economy.

The general Western view is that Putin is an inveterate enemy of democracy, determined to undermine democratic systems wherever he sees them, lest they provide a model of success that discredits his own supposedly autocratic rule.

The main lesson of the Covid pandemic, said Putin, was the continued importance of the state, as 2020 has shown that “only a viable state can act effectively in a crisis.” In good times, Putin added, people tend to argue that the state should reduce its role in the economy. But in bad times, everyone suddenly demands it should intervene to prevent economic collapse.

A “strong state” is therefore essential, said Putin. Here, he was on familiar ground. Putin is nothing if not a ‘gosudarstvennik’, or statist, for whom a strong state is an absolute priority. (RT)