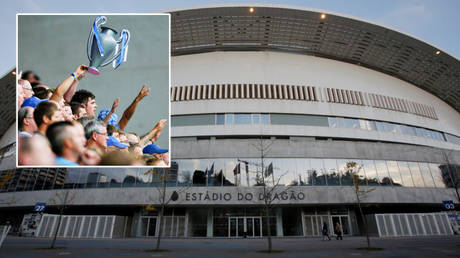 Fans travelling to this month’s Champions League final in Porto must spend no more than 24 hours in Portugal and remain securely within a strict bubble, according to the prime minister’s Minister of State, Mariana Vieira da Silva.

Porto was announced as the new host this year’s all-English final between Chelsea and Manchester City early on Thursday after original host city Istanbul saw the showpiece fixture taken from them for the second year running with the UK government imposing restrictions on citizens travelling to Turkey amid the Covid-19 crisis.

Any English football fans hoping for some fun in the Portuguese sun later this month have had their hopes dashed after it was announced that supporters are expected to be in the country for no more than 24 hours before flying home.

It beggars belief that these Portuguese Covid restrictions could not have been made clear publicly a few days back by UEFA when they began leaking that Porto was a likely option, to stop CFC/City supporters booking potentially useless flights/hotels.

“People who come to the Champions League final will come and return on the same day, with a test done in a bubble situation – that is, on charter flights with trips to a waiting area,” explained da Silva.

“Then they will go to the stadium and then to the airport, being in national territory less than 24 hours, in a bubble stay and with mandatory tests done, in principle, before getting on the plane.”

Personally I didn’t buy a flight / hotel in advance as feared this would happen. However, not telling people in advance that ‘bubble’ travel was a pre-requisite is a disgrace. Don’t imagine many will bother – £650 upwards to be cattled around for 24hrs is not appealing.

Both Premier League sides have been given an allocation of 6,000 tickets each for the game – with Portuguese officials to strictly determine where fans will sit to maintain social distancing protocols. Silva added the tickets are strictly non-transferable.

Read more:   3 killed 7 wounded as a result of Armenian missile attack in Barda

Any supporters who fly to the country but don’t attend the game will not be subject to the same guidelines.

It’s a farce mate, clubs should boycott the game but they won’t.

“Obviously, those coming by plane to be in Porto [who do not attend the stadium] will comply with the established rules and security measures put in place, as happened in Lisbon last year,” she said.

The news won’t be greeted with open arms by Porto’s tourism sector, who had been hoping that holding European club football’s most high-profile fixture in the city would have provided a temporary boost after a year in which proceeds have suffered massively. (RT)

The Kremlin is closely monitoring the situation with the parliamentary elections in Armenia, said Russian President’s Spokesperson…