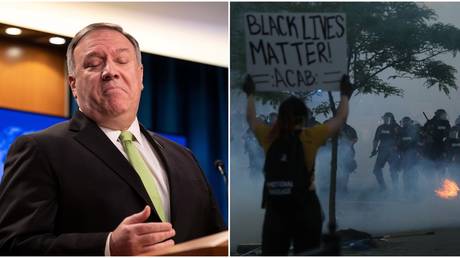 Amid protests against police brutality and threats to unleash the military on US citizens, Mike Pompeo accused China of denying citizens a voice over its refusal to permit a vigil for the victims of the Tiananmen Square massacre.

Police in Hong Kong denied permission for organizers, for the first time in 30 years, to hold the annual vigil, citing worries over the Covid-19 virus.

In a Tuesday tweet, US Secretary of State Mike Pompeo said “Beijing’s intent” was clearly “to deny Hong Kongers a voice and a choice.” The top US diplomat is set to meet with Tiananmen Square survivors at the Department of State on Tuesday afternoon, according to his public schedule.

It starts; so soon. For the first time in 30 years, Hong Kong authorities denied permission to hold the #TiananmenVigil. If there is any doubt about Beijing’s intent, it is to deny Hong Kongers a voice and a choice, making them the same as mainlanders. So much for two systems.

Read more:   Azercosmos gets 27% growth in revenues from export

Recent days have seen police officers in the US plow vehicles into groups of peaceful protesters as violence rages across numerous cities. Officers fired rubber bullets and tear gas at protesters gathered outside the White House on Monday evening. Meanwhile, police in Virginia were filmed firing tear gas at kneeling protesters minutes before a city curfew went into effect on Monday.

Also on rt.com WATCH as Virginia police fire tear gas at KNEELING protesters with hands in the air

Trump complained yesterday that states had not yet used enough violence to quell the civil unrest. In his speech on Monday, the US president threatened to unleash the US military on citizens.

Unsurprisingly, Pompeo’s tweet about denial of rights in Hong Kong was met with instant cries of “hypocrisy” on social media.

Read more:   Education Minister: Number of men, who want to become a teacher, has increased in the recent years

“Maybe if the US gave protestors the right of free assembly we would have a better case to make with other countries,” one person wrote. “Irony is dead,”said another. (RT)

Lockdown to be imposed across central Melbourne for six weeks