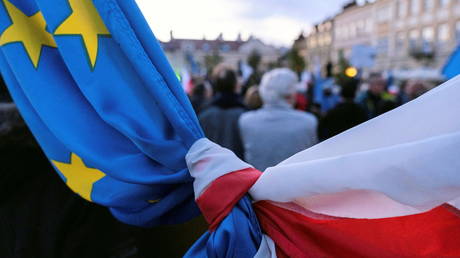 The flags of Poland and European Union tied together during a rally in support of Poland's membership in the European Union after the Constitutional Tribunal ruled on the primacy of the constitution over EU law in Rzeszow, Poland, October 10, 2021. © Reuters / Patryk Ogorzalek / Agencja Gazeta

Poland’s prime minister has lashed out with accusations that EU institutions impede on the rights of its member nations following a ruling by the country’s Constitutional Tribunal that Warsaw’s laws reign supreme over Brussels’.

Speaking to the Polish parliament on Thursday, Mateusz Morawiecki proclaimed that “we are at a crucial moment, you could say at a crossroads in the EU’s history.”

Democracy is being tested – how far will European nations retreat before this usurpation by some EU institutions.

Morawiecki’s accusations come as he is due to appear before the European Parliament next week to defend Poland’s case after a landmark court verdict found Warsaw’s constitution took primacy over EU laws.

The inquiry, which had been requested by Morawiecki to determine whether Brussels could stop the country from reorganizing its judiciary, concluded last week that some areas of EU Treaty articles are incompatible with Warsaw’s laws and subordinate to Poland’s constitution. (RT)