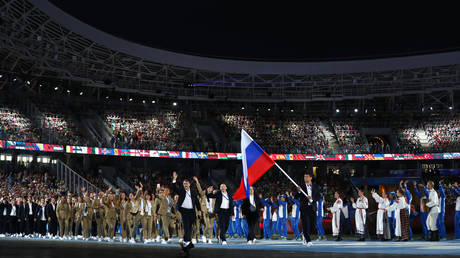 Marcin Nowak said it is ‘not possible’ to host athletes from Russia and Belarus at the event next year Russia featured at the 2019 European Games in Minsk. © Francois Nel / Getty Images

The president of the 2023 European Games in Poland, Marcin Nowak, has said it is “not possible” for the competition to host Russian and Belarusian athletes, but admits that the final word on their participation will not come from local organizers.

Russian and Belarusian athletes have been banned from most sports including athletics after the International Olympic Committee (IOC) made a recommendation in late February that has been heeded by a multitude of federations.

Recent comments from IOC president Thomas Bach suggested that Russian and Belarusian athletes could be allowed back into the international fold if they renounced the military operation in Ukraine, but Nowak doesn’t expect them to feature at the European Games – where Russia has racked up more medals than any other country – nine months from now.

“From my point of view, it’s not possible to host them in Poland because nobody would agree to it but of course the final decision will be in the EOC’s (European Olympic Committee’s) hands,” Nowak told Inside The Games.

“If they [Russia and Belarus] cannot take part in the qualification they cannot be a part of our Games, but the decision is not mine,” he added.

A row over Russian and Belarusian delegates taking part in the EOC Seminar in Ancient Olympia, Greece, broke out on its opening day.

Perhaps giving hope to Russia that it will be able to take part in the 2023 European Games, however, EOC President Spyros Capralos silenced Ukrainian and Nordic country officials when he insisted that any political statements at the seminar would be “strictly prohibited.”

Read more:   Top Eurocrat's call for Ukraine to be armed with nukes is pure madness

The EOC responded by condemning the military operation and said it is in “close dialogue” with EOC members and the IOC to deal with “this highly sensitive, complex and evolving situation.”

Krakow-Malopolska 2023 will be the third edition of the European Games, succeeding past editions in Baku in 2015 and Minsk in 2019.

The event will provide qualification opportunities for the Paris 2024 Olympic Games, and is scheduled to run from June 21 to July 2. (RT)