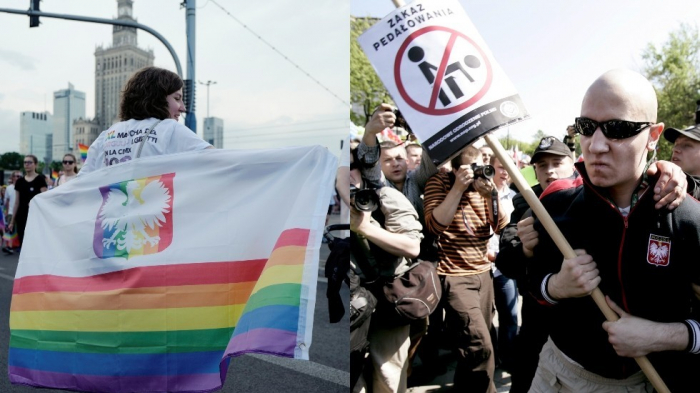 A conservative Polish newspaper has kicked off heated controversy after announcing it would include ‘LGBT-free zone’ stickers in a future issue, prompting comparisons to anti-Jewish signs and slogans used by the Nazis.

A preview of the contentious sticker was shared to Twitter on Wednesday by Gazeta Polska, a right-of-center publication with a readership of around 110,000. The paper said the sticker would be included in its next edition as an insert.

It wasn’t long before an outpouring of criticism enveloped the outlet on social media and elsewhere, including from Polish officials and citizens, and even Washington’s ambassador to the country, Georgette Mosbacher, a known supporter of the LGBT cause.

“I am disappointed and concerned that some groups use stickers to promote hatred and intolerance,” the ambassador tweeted on Thursday, adding “we respect freedom of speech,” but insisted on standing behind the values of diversity and tolerance.

The newspaper’s editor, Tomasz Sakiewicz, soon shot back, stating “I respect your views,” and “we are opposed only to the imposition of views by force.”

However, “being an activist in the gay movement does not make anyone more tolerant,” Sakiewicz added.

In Warsaw, the city’s deputy mayor slammed the newspaper for what he said recalled “Jew-free zones” created by “German fascists,” and said it was all happening with acqueseance from the country’s leading party, Law and Justice. Several commenters on social media appeared to agree with the comparison.

“LGBT is PEOPLE,” one person said, adding the sticker is “vividly associated” with German posters warning “Juden” to keep out.

As attitudes about same-sex relationships shift accross Europe, particularly in countries like France, Germany and the UK, gay marriage remains outlawed in Poland. Though the country is home to a growing LGBT movement, homosexuality remains controversial among some more socially conservative Poles.