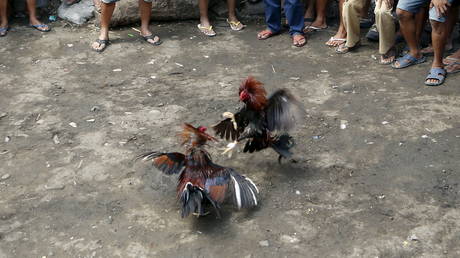 A Filipino police officer bled to death after a fighting cock slashed his femoral artery during a raid on an illegal event on the island of Northern Samar. Like other sports, cockfights have been officially banned due to Covid-19.

Lieutenant Christian Bolok was fatally cut in his left thigh when he picked up the rooster, which still had its fighting spurs – long, sharp blades – attached to its talons, during Monday’s raid on the illegal event in San Jose. Though he was rushed to a nearby hospital, Bolok, who served as police chief for the town, was declared dead on arrival, having bled to death from his wound.

Police Chief Colonel Arnel Apud described the grisly incident as “an unfortunate accident and a piece of bad luck that I cannot explain” during a press conference on Northern Samar. (RT)