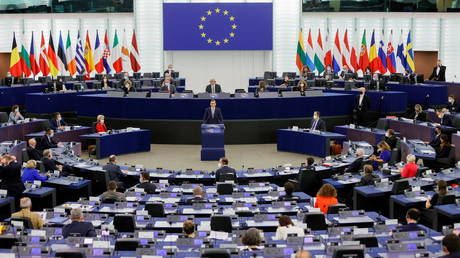 Polish Prime Minister Mateusz Morawiecki delivers a speech during a debate on Poland's challenge to the supremacy of EU laws at the European Parliament in Strasbourg, France October 19, 2021 © Ronald Wittek/Pool via REUTERS

The European Commission president has warned that Poland will face penalties for its move to make EU law subordinate to national law, after a Warsaw court backed the government’s defiance of Brussels’ supremacy.

Speaking to the European Parliament in Strasbourg on Tuesday, European Commission President Ursula von der Leyen said there were three options available to the EU after Poland challenged the primacy of the bloc’s laws over its national law.

“This ruling calls into question the foundations of the European Union. It is a direct challenge to the unity of the European legal order,” she stated, adding that they were carefully considering their response after Poland’s Constitutional Tribunal ruled that parts of European law were incompatible with the Polish constitution. (RT)