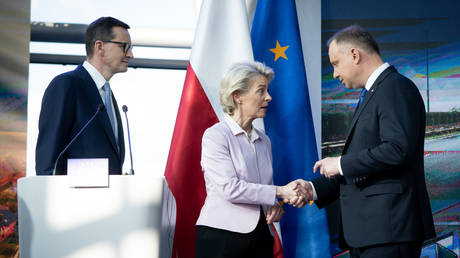 Senior officials in the Polish conservative Law and Order (PiS) party have blasted the EU for what they perceive as a broken obligation to release billions of euros in funding, which had been frozen by Brussels as pressure on Warsaw over its perceived downslide in rule-of-law issues. If squeezed further, Poland will use every opportunity to disrupt the work of the European Commission in retaliation, one politician has vowed.

If Brussels presses Warsaw to the wall, “we will have no choice but to pull out all the cannons in our arsenal and open fire,” Krzysztof Sobolewski, the party secretary-general said on Monday, in an interview with Polish Radio.

Poland’s government will be guided by the principles of “you reap what you sow” and “tooth for a tooth” when dealing with the European Commission, he said. Warsaw may use its veto power in the EU, form a coalition to oust Ursula von der Leyen as Commission president, and otherwise leverage its place in the union to throw a wrench into the gears of the union’s executive branch, he suggested. (RT)