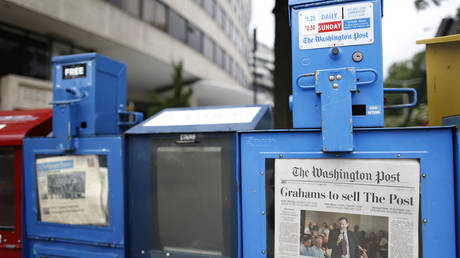 The Washington Post has taken heat from India’s ruling Bharatiya Janata Party, whose official lamented its coverage as local traders voiced outrage over perceived aggression by another Bezos venture, Amazon.

There’s “a lot of problems” in how the newspaper is reporting from India, Vijay Chauthaiwale, chief of the Bharatiya Janata Party’s (BJP) foreign affairs department, told Reuters.

“The Washington Post’s editorial policy is highly biased and agenda driven,” the official explained, without highlighting any examples.

He previously complained about foreign coverage of Indian-controlled Kashmir which was recently stripped of its decades-long autonomy, alleging blatant bias against Prime Minister Narendra Modi.

The swipe at the newspaper nearly coincided with Bezos’ trip to India. The founder of Amazon – who also owns the Washington Post – has been trying to aggressively pivot to India’s burgeoning online retail market. (RT)