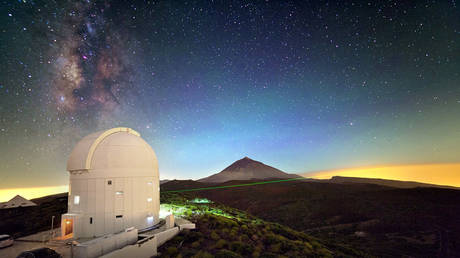 Lasers are our go-to tool to track space debris above the Earth and help companies and nations alike avoid any unwanted contact in orbit. However, these defences have been operating under extreme limitations… until now.

One major flaw in the existing orbital monitoring system was that it had a limited window of opportunity to actually conduct the tracking, due to a lack of contrast against the sky.

While the ‘laser-ranging’ station on Earth is in darkness, sunlight glare off objects in higher orbits precluded them from study and tracking until researchers made a breakthrough.

Skygazing spotters can now improve their orbital predictions for objects, keeping valuable spacecraft and crew safer than ever before from the vast debris clouds that had laid largely hidden in low-Earth orbit.

“Using this new technique, it will become possible to track previously ‘invisible’ objects that had been lurking in the blue skies, which means we can work all day with laser ranging to support collision avoidance,” explained Dr Tim Flohrer, of the Space Debris Office at the European Space Agency (ESA).

Earth’s orbital debris field comprises millions of tiny objects and shrapnel left over from previous missions to space, as well as from in-orbit explosions and collisions between defunct spacecraft, modules, and satellites. (RT)

18:39 By now, 33 civilians in total have been hospitalized with various injuries – Prosecutor General’s Office

18:27 Azerbaijani army reserve soldiers are on stand by