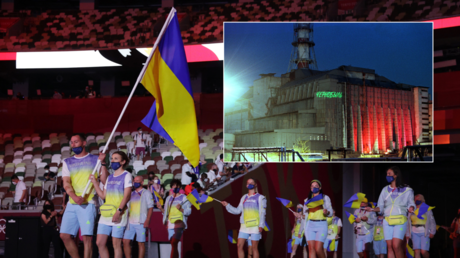 Ukrainian flag bearers lead an athletes' parade during the opening ceremony at the Tokyo Olympics, in Tokyo, Japan, July 23, 2021; The remains of the Chernobyl nuclear plant are seen in Pripyat, Ukraine. ©  Reuters / Hannah Mckay;  Reuters / Stringer

A South Korean TV station has issued an apology after using “inappropriate” graphics to represent nations at the Tokyo Olympics, including a photo of riots for Haiti and the deadly Chernobyl meltdown for Ukraine, baffling viewers.

The Seoul-based Munhwa Broadcasting Corporation (MBC) turned heads with its questionable image choices as the games kicked off in Tokyo on Friday. While some countries were represented with more innocuous items – a tantalizing pizza pie was used for Italy, and a juicy hunk of salmon for Norway – others were more controversial.

Haiti, for example, was portrayed with a photo apparently captured during a riot, with what looks like burning tires roasting in the background. When the country’s athletes entered the stadium, the TV outlet explained with on-screen text that Haiti’s “political situation is fogged by the assassination of the president,” according to South Korea-based journalist Raphael Rashid.

Ukraine, meanwhile, was treated to a stark, black and white image of the Chernobyl Nuclear Power Plant, which experienced a major disaster in 1986 after explosions tore through its reactors. Why the tragedy was used as a stand-in for the country itself is unclear, but the decision nonetheless sent “Chernobyl” trending on the Korean segment of Twitter, Rashid noted. “National disgrace” also reportedly rose in the trends over the outlet’s bizarre ‘geography lesson.’

South Korean news will never pass up the opportunity to show how absolutely batshit insane they areFor MBC To use a photo of Chernobyl cite and the riots in Haiti because of the assassination for how they introduce countries for the Olympics is absolutely bonkers to me pic.twitter.com/vVGGZx21ga

We apologize to the relevant countries mentioned, including Ukraine and to Korean viewers.

Netizens nonetheless panned the TV station, one arguing the image choices showed a “lack of respect” toward the countries in question, though some maintained it “could’ve been worse” for certain nations.

Did they literally just pick whatever the first picture was that popped up on Google when they did an image search for the country?

I am italian. Could’ve been worse for us, honestly

The oddities in MBC’s coverage did not end with the ill-advised graphics. In introducing Sweden, the outlet apparently intended to describe it as “developed country of welfare,” but a typo transformed “developed country” into “cow blood soup,” a Korean dish. While the image used for the country at least included Sweden, MBC inexplicably went with a graphic showing all of Europe with a small marker denoting Stockholm.

The mishap is not MBC’s first Olympic gaffe. According to Rashid, during 2008’s games in Beijing, the outlet introduced the Cayman Islands as a “famous” tax haven and Chad as the “dead heart of Africa.” Zimbabwe, meanwhile, was said to be known for its “murderous inflation.” The broadcast earned MBC a stern warning from Seoul’s media regulator. (RT)

The UN Secretary-General Antonio Guterres met with Jeyhun Bayramov, Minister of Foreign Affairs of the Republic…