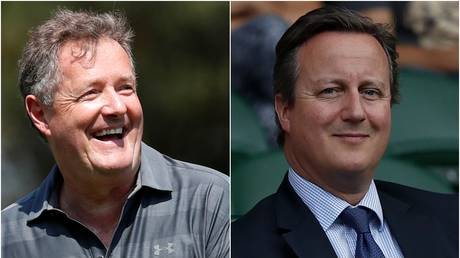 “This is shameful sleazy conduct by @David Cameron,” Morgan wrote on Twitter, adding that it was “disgraceful” for the former PM to seek profit during a pandemic.

This is shameful sleazy conduct by @David_Cameron – it’s disgraceful that a former Prime Minister should be seeking to profit from a pandemic like this. https://t.co/r8AKyHW1d3

Cameron, who served as the British prime minister between 2010 and 2016, faces criticism for lobbying on behalf of financial services firm Greensill Capital, which was trying to secure government-backed loans and a contract for a payment app with the NHS. The company was founded by Australian banker Lex Greensill, who was Cameron’s adviser during his tenure as PM.

After Cameron left office, he became an adviser for Greensill. The company ran into financial problems and collapsed last month.

The controversy also threw shade on Health Secretary Matt Hancock, who the UK media said had a private drink with Cameron and Greensill in 2019 as part of a lobbying effort for the NHS app. A government spokesperson told reporters this week there was no misconduct in Hancock’s actions and that ministers “have no involvement” in awarding such contracts. (RT)