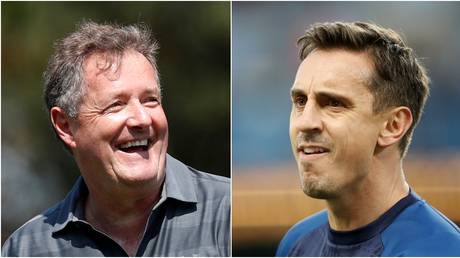 With the global sporting calendar currently on pause due to the coronavirus pandemic, former pro footballer Gary Neville and professional provocateur Piers Morgan have very contrasting views on how and when to resume play.

With the English Premier League – and indeed all major football leagues across the globe – currently suspended due to the outbreak, football fans are in a state of uncertainty as to how, or if, the current football season can be completed.

Football authorities in England had initially outlined an April 3 date to return to action but that has since been extended to April 30. However, with the pandemic worsening and further measures being implemented across swathes of society to mitigate the spread of Covid-19 many are suggesting that it looks increasingly unlikely that the reason can be resumed with enough time to complete the unplayed fixtures in advance of next season.

The one-year postponement of this summer’s European Championships leaves open a potential window in which games might – in theory – be able to be played (if the situation is deemed safe) and has led to something of a civil war among England’s football analysts. Some maintain that the unplayed games must be played, and others say that the best course of action would be to declare the season null and void and start anew next season.

This contrast in thinking was apparent in a social media spat between former Manchester United defender Gary Neville and television host Piers Morgan on Saturday, with the former declaring the fixtures must be completed and the latter calling for The FA to effectively cancel the 2019-20 season.

Piers it will work and is likely to happen when and only when it is safe to do so.

Writing on Twitter, Neville proposed that the current Premier League season could be completed within a brief period of consistent games (so long as it is safe to do so) and to condense next season into a shorter timeframe.

He also advocated for the transfer window to remain open for the entirety of next season to provide teams with financial agility, as well as extending the contracts of players to fulfil any summer fixtures, as well as financial packages being arranged for clubs whose very existence may be threatened by a loss of income.

Morgan, though, doesn’t agree. Replying to Neville on Twitter, he said that playing numerous games in a short timespan would increase the risk of injury and that the only viable option is to effectively cancel the season. (RT)