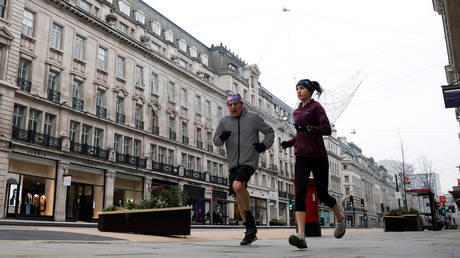 Getting good exercise, or risking their lives? © Reuters / John Sibley

ITV’s Good Morning Britain has attempted to guilt runners into masking up, hosting a professor who called joggers a hazard for dog-walking old ladies as host Piers Morgan groused they spoiled his strolls. It wasn’t well-received.

“The puffing and panting jogger” is a public menace, Oxford University professor Trish Greenhalgh warned the audience in Tuesday’s episode of the programme. She urged runners to wear masks outdoors lest they unknowingly be spreading the virus.

“There’s no doubt the virus is in the air, there’s no doubt that you can catch it if you inhale air that someone else has exhaled,” Greenhalgh continued, suggesting that one can actually feel oneself inhaling the exhaled breath of a rogue jogger even from two meters away.

Should runners wear masks?Professor Trish Greenhalgh tells @piersmorgan and @susannareid100 that it is ‘important to be socially responsible’ due to the way Covid transmits.Amid the fears that a wet mask can breed germs, she says the mask should be washed straight away. pic.twitter.com/kGeRCZT3in

“You’re jogging along, you think you’re fine, and then the next day you’ve developed symptoms of Covid. But you’ve actually breathed that Covid onto someone, perhaps an old lady walking her dog or something like that,” Greenhalgh explained, shaming those benighted Brits who thought they were just out having a run.

Greenhalgh did concede that “wet soggy masks are not a good idea,” but suggested that doesn’t excuse the joggers from wearing and washing them.

Host Piers Morgan, always one of the loudest voices to praise lockdowns, masks, and other social controls still hanging around a year after “two weeks to flatten the curve,” found runners on the high street to be more of an aesthetic issue.

“There’s something so narcissistic about these people… running… especially if they’re not very fit,” Morgan sneered, apparently missing the point of exercise. Running down the high street was “the ultimate nonsense show-off gorilla-beating,” he continued as former Labour Party deputy leader Tom Watson defended the practice.

Also on rt.com PM for PM? The panic-spreading pro-lockdown TV host Piers Morgan is part of the problem and definitely not the solution

Morgan was unswayed, however. “I would make it illegal for joggers to run along high streets,” he declared, egging himself on, before conceding that “they can do it slowly if they wear the mask.” He did not elaborate on who would have the vitally important duty of clocking runners’ speed.

The discussion polarized social media users, with many pointing out that runners, cyclists, and other outdoor exercisers seldom hung around long enough to breathe their germs onto passersby.

Some suggested the problem was the other way around, blaming sidewalk-hogging walkers.

Walkers should not walk two abreast, with fifty prams, then role their eyes as a jogger goes past 2m away from them.

No one moves for the runner in my experience – they see you coming but hold their ground not socially distanced from the person they are walking with, whilst I make the choice to run through the mud or in the road to avoid them …..

Others raised an eyebrow at how one might differentiate between a “jogger” and a “fast walker,” suggesting the rules were deliberately absurd and that the “experts” cited had never actually tried “running or exercising with a restrictive piece of cloth over your face.”

Can the experts clarify at what pace do I become a jogger? Also plenty of walkers exhale a lot harder then I might do whilst ‘jogging’ is everyone going to be checked for current lung function or something?

Very true. I’ve been at places were there is a 3.5m wide path, but groups happily walk 4 or 5 abreast, blocking the entire path to anyone coming up faster than them from behind.When I said excuse me, one group suggested that I needed a bicycle bell…

A few pointed out that wearing masks while running had been declared harmful by the World Health Organization and that even the UK’s deputy chief medical officer had said – back in April – that masks were no good “for general wearing.” Others cited a handful of disturbing stories from China last year that saw multiple schoolchildren and a young man die while exercising with masks on, or warned the show’s claims would discourage exercise itself.

Experts have said this is dangerous pic.twitter.com/ngOToIIzmd

Rubbish.There is no new evidence of the effectiveness of masks since Jonathan Van-Tam trashed them. Please watch the video on link:https://t.co/OjW7U21SdD

However, plenty were eager to see joggers punished. (RT)