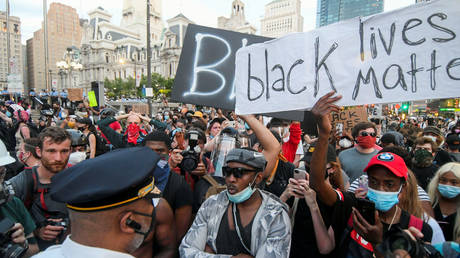 A group of protesters at an anti-police brutality march in Philadelphia was seen expelling three Jewish men from the event, one of whom was shoved as the trio was accosted with slurs and forced to leave the area.

Footage making the rounds on social media on Wednesday shows a small group of demonstrators confronting the three young men, who are seen wearing kippah caps, asking them where they live before demanding they “get the f**k out!”

“What y’all doing down here? Y’all live here? You know we the real Jews, right?” one is heard saying, as another adds “This ain’t your fight. Y’all gotta go.”

One of the men responds that they are “just showing solidarity,” but is shouted down. Another member of the trio is given a hard shove moments later while the instigators insist the men leave, which they ultimately agreed to do. As a parting shot, a protester says “Revelation 2:9, Synagogue of Satan,” apparently citing a bible verse.

Orthodox Jews violently attacked by mob @ BLM protest last night in Philly. They told protesters they were there to show solidarity. Mob shouted anti Semitic & racist hate as they assaulted victims. Spoke to victim, says he feared for his life. This needs to be condemned by all! pic.twitter.com/oAY2kSaqM4

The biblical reference and other remarks heard in the exchange are common to the Black Hebrew Israelite movement, which posits that African Americans are the true descendants of the ancient Israelites but is widely regarded as anti-Semitic. The group has a presence in Philadelphia, occasionally seen street preaching in the city.

The minute-long video has triggered outrage from Jewish commentators, among them Yaacov Behrman, a public relations rep with the prominent Orthodox organization Chabad Lubavitch. (RT)