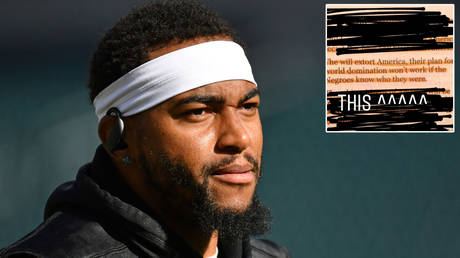 Philadelphia Eagles have strongly distanced themselves from incendiary posts by receiver DeSean Jackson after he shared a conspiracy theory, wrongly attributed to Adolf Hitler, claiming that white Jews secretly control the world.

The 33-year-old, who is in his second spell with the team owned by billionaire Jewish film producer and businessman Jeffrey Lurie, did not elaborate on why his decision to highlight a quote saying that white Jews “will blackmail America” was not antisemitic.

Three-time Pro Bowl selection Jackson has also praised Louis Farrakhan, the Nation of Islam leader declared to be antisemitic by the Southern Poverty Law Center, as a “powerful” figure worthy of educating the “blinded”.

The quote attributed to the former Nazi leader says that Jewish people “will extort America” and argues that “their plan for world domination won’t work if the Negroes know who they were.”

If a white player said anything about AA’s as outrageous as what Desean Jackson said about Jews tonight there would at least be a serious conversation about cutting him and a need for a team meeting to discuss. Which would be totally appropriate. Absolutely indefensible.

The disproven story theorizes that Hitler wanted to start a world war to stop Jews in America from oppressing black people, but Jackson responded to shocked criticism by insisting that he was only interested in “equality”.

“Anyone who feels I have hate towards the Jewish community took my post the wrong way,” he said on an Instagram story, puzzling many viewers by highlighting the passage attributed to Hitler again.

“I have no hatred in my heart toward no one.”

After fans piled pressure on the Eagles to condemn Jackson’s bizarre posts, the club issued a statement announcing that they had told him to apologize and were “disappointed” by his behavior.

“Regardless of his intentions, the messages he shared were offensive, harmful and absolutely appalling,” they said.

“They have no place in our society and are not condoned or supported in any way by the organization.

“We are continuing to evaluate the circumstances and will take appropriate action. We take these matters very seriously and are committed to continuing to have productive and meaningful conversations with DeSean as well as all of our players and staff, in order to educate, learn and grow.”

“If a white player said anything about African-Americans as outrageous as what Desean Jackson said about Jews, there would at least be a serious conversation about cutting him and a need for a team meeting to discuss,” he said. “Which would be totally appropriate.

“I feel for all the Jews who love the Eagles and feel tremendous disappointment and betrayal right now,” they added.

Tough for not just Eagles fans, but I feel for all the Jews who love the Eagles and feel tremendous disappointment and betrayal right now.

Had to explain to my 10 yr old son – a fan- that you hate him because he’s jewish. He couldn’t understand it. Especially because we do not tolerate or condone any form of racism or intolerance in our home.

Another told Jackson: “Had to explain to my 10-year-old son – a fan – that you hate him because he’s Jewish. He couldn’t understand it. Especially because we do not tolerate or condone any form of racism or intolerance in our home.” (RT)