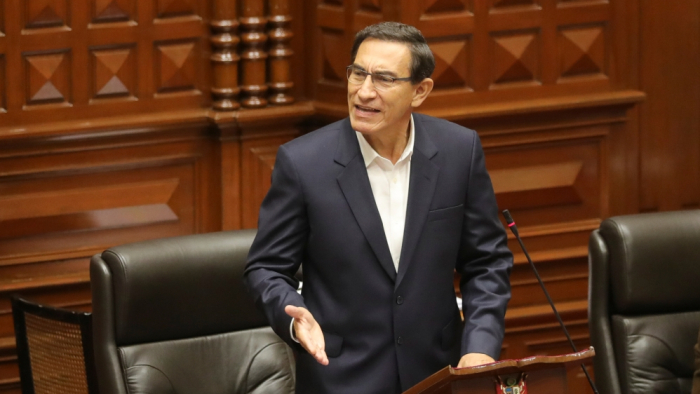 Peru’s President Martin Vizcarra has survived an impeachment vote after opposition legislators failed to amass enough support to remove him from office, quelling political tensions in the Andean country as it battles one of the world’s worst coronavirus outbreaks, Al Jazeera reported.

After Friday’s debate, which lasted for 10 hours, only 32 legislators voted for Vizcarra’s dismissal, while 78 voted against and 15 abstained.

The opposition-dominated Congress needed 87 votes out of 130 to remove the president.

The Congress voted last week to begin impeachment proceedings against Vizcarra, on the grounds of “moral incapacity” over alleged links to a little-known singer involved in a case of irregular government contracts.

Vizcarra, who does not have his own party representation in the legislature, struck a defiant tone earlier on Friday in a 20-minute speech to Congress, saying the country should not be “distracted” from real challenges.

“I do not hide, I have not done so before and I am not going to do it now. I am here, with my head high and my conscience clear,” said the 57-year-old leader.

“It is very serious to have the country plunged into this uncertainty.”

At the centre of the crisis is Vizcarra’s relationship with a musician known as Richard Cisneros and nearly $50,000 in questionable contracts that the entertainer was given by the Ministry of Culture for activities like motivational speaking.

A covert audio recording shared by Edgar Alarcon – a legislator himself charged with embezzlement – appears to show Vizcarra coordinating a defence strategy with two aides, trying to get their stories straight on how many times the musician had visited him.

The deals with Cisneros, who is also known as Richard Swing, are being investigated by the parliament and Peru’s auditor general. Cisneros was involved in the campaign of Pedro Pablo Kuczynski, who resigned as president in 2018 and was replaced by Vizcarra, then the vice president.

In his remarks before Congress, Vizcarra asked for forgiveness for the upheaval the audios have generated, but insisted he committed no crime. He also called for a proper investigation.

During the long day of debate, many legislators expressed frustration with Vizcarra, but they also questioned whether a rushed impeachment process would only create more turmoil in the middle of a health and economic crisis.

“It’s not the moment to proceed with an impeachment which would add even more problems to the tragedy we are living,” said legislator Francisco Sagasti.

Vizcarra had claimed that the move was a plot by Congress, which was elected in January after the president dissolved the previous parliament last year in the middle of a fight with the opposition over his anti-corruption reforms.

A recent Ipsos poll showed that 79 percent of Peruvians would prefer that Vizcarra fulfil his mandate until mid-next year following elections set to take place in April. Vizcarra, in power since 2018, is not running in those elections.

The president had also accused the speaker, Manuel Marino, of “conspiracy” by trying to secure military assurances for a bid to succeed him.

Al Jazeera’s Mariana Sanchez, reporting from the Peruvian capital, Lima, said the impeachment trial had damaged both Vizcarra and the Congress’s public image.

“How is it possible that only last week that opposition-dominated Congress passed a motion to impeach the president and now they voted against it? What happened in this week? What exactly were they thinking when they voted to open proceedings?

“What happens with Martin Vizcarra now? He will have a very difficult time governing until July of next year given this animosity in Congress. His image and that of Congress, too, has been affected, for having plunged Peru into a political crisis in the middle of the worst health and economic crises in the country in more than 100 years.”

Peru, the world’s second-largest copper producer, has a history of political turmoil, with three attempts to impeach a sitting president in the last five years.