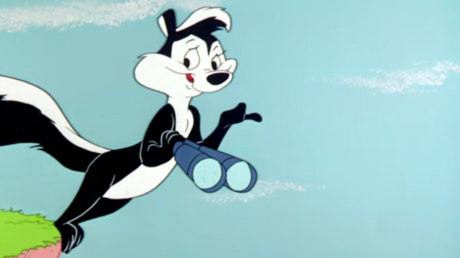 Pepe Le Pew, whose amorous adventures have amused audiences for decades, is now the face of “rape culture,” at least according to the New York Times. However, Pepe has already been axed from an upcoming ‘Space Jam’ sequel.

New York Times columnist Charles Blow opened up a new front in the never-ending culture wars over the weekend, when he accused Pepe Le Pew, the cartoon skunk whose failed attempts to woo women always land him in trouble, of perpetuating “rape culture.”

Though the running gag is that Pepe, oblivious to his own repulsive stink and behavior, never succeeds in his romantic endeavors, Blow still insisted that Pepe “helped teach boys that ‘no’ didn’t really mean no” and that overcoming a woman’s physical resistance was “normal, adorable, [and] funny.”

Amid the cartoon controversy, Deadline revealed on Sunday that a scene involving Pepe had already been cut from Warner Bros’ upcoming sequel to ‘Space Jam,’ the beloved part-animated, part-live-action adventure from 1996.

The cancelation “has nothing to do” with Blow’s anti-Pepe crusade, Deadline stressed. (RT)

The exercise will start in the south of Japan from May 11, marking the first…

Baku will host the Para-Judo Grand Prix, Report informs, citing the decision made by the…