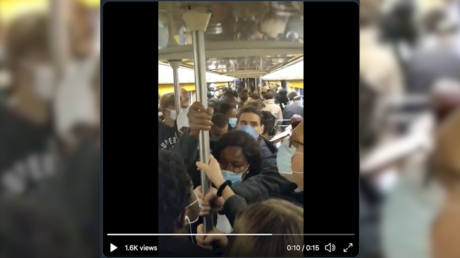 France has recorded two consecutive days of over 18,000 new coronavirus cases as authorities scramble to impose new restrictions and stem the tide of infection. Despite this, public transport is still dangerously overcrowded.

The cities of Lyon, Lille, Grenoble and Saint-Etienne will be placed on maximum alert with additional restrictions taking effect over the coming weekend while Paris, Marseille and Guadeloupe are already on maximum alert.

Veran once again called for the public to adhere to social distancing, even at home, following a worrying number of transmissions from the young to elderly or vulnerable family members.

Hospitals in the Paris region have been placed on emergency mode with staff vacations canceled and non-essential operations postponed, as coronavirus patients once again fill up intensive care unit beds.

The country’s death toll now stands at over 32,520, with severe restrictions already introduced in the past few days as bars, casinos and exhibitions have been ordered to close in many areas, while restaurants, cinemas and museums face stricter controls than the past few months.

The French government has been loath to place the country back into lockdown as concerns remain about the economy.

No need for mass vaccination against monkeypox – WHO

Meanwhile, the total number of cases in the UK alone has reached 106 Magnified image…