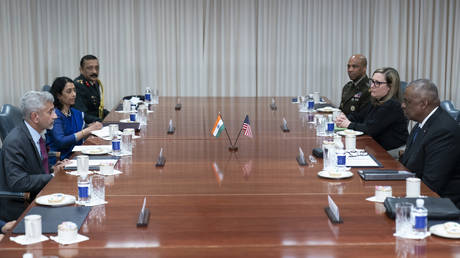 The US aims to strengthen its military ties with New Delhi, accusing Beijing of challenging the “rules-based international order” India’s Foreign Minister Subrahmanyam Jaishankar and US Secretary of Defense Lloyd Austin meet at the Pentagon, September 26, 2022 © AP / Alex Brandon

US Secretary of Defense Lloyd Austin hosted a meeting on Monday at the Pentagon with Indian External Affairs Minister Subrahmanyam Jaishankar, discussing ways to deepen their bilateral defense cooperation. The officials “reaffirmed their commitment to working together as steadfast partners to advance the United States and India’s shared vision for a free, open, and inclusive Indo-Pacific,” the Pentagon said.

The main challenge to that vision – at least as Washington sees it – is China, which has triggered territorial disputes with various nations in the South China Sea. Beijing also has vowed to reunify with Taiwan, which it sees as a breakaway province. China and the US have clashed increasingly over Taiwan in recent months, especially after House Speaker Nancy Pelosi visited the self-governing island in August, a move that Beijing saw as undermining its sovereignty. China responded by cutting off military and climate ties with Washington and holding military exercises in the Taiwan Strait.

“Regional security is especially important right now, due to China’s increasing bellicosity, especially regarding Taiwan,” Austin said. “In recent months, we have seen the PRC intensify its efforts to challenge the rules-based international order.”

Austin added that the US and India face “sustained challenges to peace, security and prosperity around the world.” He also blasted Beijing for declining to condemn and isolate Russia over the Ukraine conflict.

“China continues to support Russia – a nation also seeking to overturn the rules-based order – amid its unprovoked and cruel invasion of Ukraine,” Austin said. 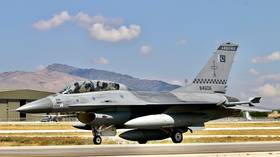 However, the US also has been unable to persuade New Delhi to stop doing business with Russia. In fact, India has sharply increased oil and coal imports from Russia this year. A US State Department official told reporters last week that Washington is in “deep” talks with Indian officials over the South Asian country’s reliance on Russian energy and weaponry.

Read more:   Ukraine could be just the starting point of a bigger crisis

Jaishankar downplayed the Ukraine aspect of Monday’s meeting, saying, “I do share with you that the global situation has become far more challenging this year [due to] a variety of reasons, the Indo-Pacific in particular. It’s important that the stability, security and prosperity of the Indo-Pacific should be secured. That is best done amongst others by cooperation between two countries.”

Austin hosted Indian Defense Minister Rajnath Singh at the Pentagon in April and spoke with Singh by phone earlier this month. While both sides said the call was “productive,” Singh lodged a complaint over a recent US deal to help extend the lifespan of Pakistan’s F-16 fighter jets. (RT)