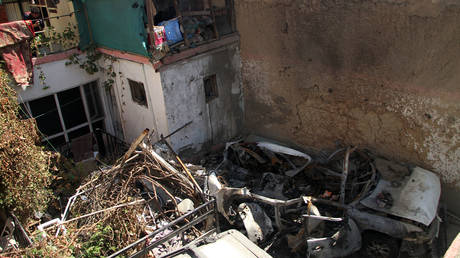 The site of a US drone strike that killed 10 civilians, including seven children, is seen in Kabul, Afghanistan, September 18, 2021. ©  Global Look Press / Xinhua / Saifurahman Safi

The US military is offering “condolence payments” to a family in Afghanistan after a badly planned drone strike killed 10 civilians, including seven children, in the country’s capital in August, though did not provide any numbers.

The offer was raised during a virtual meeting between Under Secretary of Defense for Policy Colin Kahl and Dr. Steven Kwon, who employed one of the Akhmadis killed in the strike at his US-based aid organization, Nutrition & Education International, long active in Afghanistan.

“Kahl noted that the strike was a tragic mistake and that Mr. Zemari Akhmadi and others who were killed were innocent victims who bore no blame and were not affiliated with ISIS-K or threats to US forces,” Kirby went on.

The statement, from @PentagonPresSec does not mention any amounts for the ex gratia condolence payments for the civilians killedre last US drone strike in #Afghanistanpic.twitter.com/D6LKMRbtuF

The Pentagon initially deemed the strike a success, claiming to have killed an Islamic State militant planning attacks on American troops in Kabul, with Chairman of the Joint Chiefs of Staff Mark Milley even calling it “righteous.” However, thanks in large part to a New York Times investigation that raised serious questions about the military’s narrative about the drone strike, officials were soon forced to admit the operation failed to take a single terrorist off the battlefield and instead massacred an innocent family.

The misidentified main target of the attack, Zemari Akhmadi, was employed as an aid worker with Nutrition & Education International for years, the Times investigation revealed. He was killed as he pulled into his driveway outside his home, with the Pentagon originally claiming he was seen loading explosives into the vehicle earlier in the day. The Times, however, obtained security footage showing Akhmadi loading jugs of water into his vehicle, suggesting the military may have mistaken them for bombs.

Among the youngest of the victims were Malika Akhmadi and Sumaya Yousoufi, both two years old, who were reportedly gathered with family at the Kabul home for a celebration. (RT)