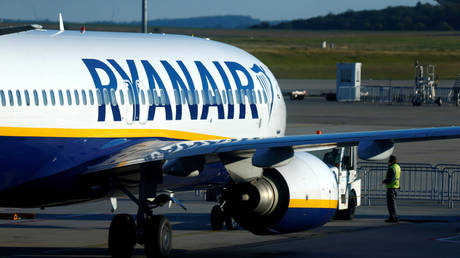 European airports were in chaos on Saturday as Ryanair grounded planes due to a “systems failure” that left passengers stranded and stressed out.

Passengers reported being unable to check-in for flights online after a systems failure occurred overnight, affecting major airports across Europe. Ryanair says the system has since been restored, but irate travelers are still reporting issues on social media.

@Ryanair daughter unable to check online last night as website down ..queued
for an hour at gatwick now to pay £55 penalty while staff are struggling with system down.( how dare u penalise people for your system failure)..still queueing again for check in…😡

@Ryanair my return booking from Nice to Stansted TODAY has disappeared from both app and website. Booking ref no longer working. Help URGENTLY please. This is shambolic.

There are reports of long queues to check in luggage at airports, and passengers are saying that they were forced to pay Ryanair’s airport check-in fee of £55 ($68) because they were unable to do so in advance on the app. Angry customers are also reporting that some flights departed without all passengers onboard, and that flight confirmations had simply vanished from the app.

One plane was delayed on the tarmac for 90 minutes and passengers were told it was due to a “country-wide systems failure.” (RT)