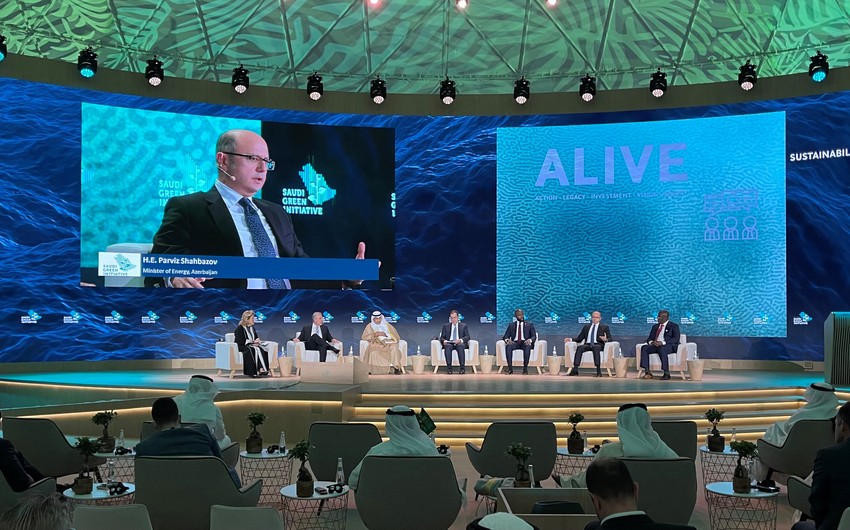 Azerbaijani Energy Minister Parviz Shahbazov participated at the inauguration ceremony of the “Saudi Green Initiative” held in Riyadh at the invitation of Prince Abdulaziz bin Salman Al Saud, Energy Minister of the Kingdom of Saudi Arabia, on October 23, 2021, Report informs.

A number of issues such as climate change and biodiversity conservation, green economy, energy transition, the introduction of low-emission industrial technologies, the expansion of the use of renewable energy sources, the use of hydrogen for energy purposes were discussed at the event “A New Era of Action: Oasis Alive,” which brought together the leaders from government, business, finance and civil society.

Speaking at the Ministerial Panel on “Sustainability and economic development,” Parviz Shahbazov stressed the importance of ensuring a balance between ecological, energy and economic sustainability. The minister noted that the development of the use of renewable energy sources in our country is included in the national priorities for socio-economic development by the President of the Republic of Azerbaijan Mr. Ilham Aliyev, and it is aimed to increase the share of installed capacity in “green energy” in our country to 30% over the next decade. During the speech, it was noted that work is carried out to turn the liberated territories into a green energy zone.

Within the event, several meetings were held with the Minister of Energy of the Kingdom of Saudi Arabia Abdul Aziz bin Salman Al-Saud, the Minister of Investment Khalid Al-Falih, the director-general of the OPEC Fund for International Development (OFID) Abdulhamid Al Khalifa, the Chairman of the Board of Directors of ACWA Power Mohammad Abunayyan, Chairman and Chief Executive Officer of “Total” Patrick Pouyanné, Executive Vice President of Air Products Samir Serhan, and a number of issues of mutual interest were discussed.

Minister gave interviews to representatives of international media such as “Bloomberg,” “Arab News,” “Kawa News” during the event.