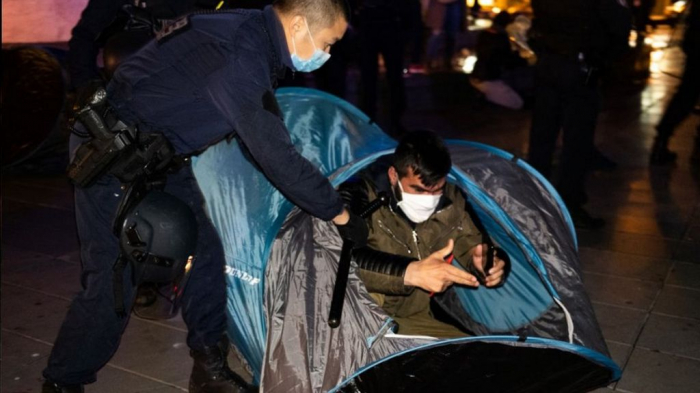 Interior Minister Gérald Darmanin tweeted that some of the scenes were “shocking”, and ordered the police to provide a full report on their actions.

Dozens of small tents were removed from Place de la République, with occupants sometimes being tipped out by police.

The homeless migrants say they are forced to live on the streets.

Volunteers had joined the migrants and, linking arms, the crowd – several hundred strong – chanted “papers for all, accommodation for all!” when police moved in.

Police later used tear gas and chased people through the streets, beating up some with batons.

The new camp appeared a week after police had dismantled a bigger, illegal migrant campsite near the French national sports stadium in northern Paris.

“They are too violent,” lamented Shahbuddin, a 34-year-old Afghan, quoted by AFP news agency. “We just want a roof.”

President Emmanuel Macron has adopted a tough policy towards irregular migrants, many of whom see their final destination as the UK, via Calais.

The huge surge in migration from the Mediterranean in 2015, fuelled by the Syrian civil war and other conflicts, has declined, but many asylum seekers still live in precarious conditions in Europe, homeless and unemployed.