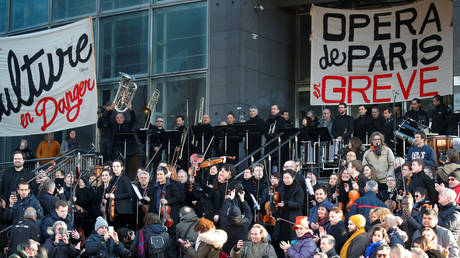 Paris Opera musicians on strike over unpopular pension reform plans proposed by the French government delighted passers-by with a free New Year’s Eve concert on the steps outside the Bastille opera house.

In the Tuesday evening show, the musicians performed classics like the Dance of the Night from Sergei Prokofiev’s ‘Romeo and Juliet’ and Damnation of Faust by Hector Berlioz, as well as offering a rousing rendition of La Marseillaise, France’s national anthem.

The Paris Opera is on strike — so today it held a free outdoor concert for the public.Art against austerity is lovely. 🌹🌹🌹 pic.twitter.com/lnTAWyhFJR

The striking musicians are covered by one of France’s 42 individual pension schemes, which President Emmanuel Macron’s government is trying to streamline into one cohesive system. Under the new plan, opera employees would lose their right to early retirement.

One musician told the crowd before the free concert began that opera employees “still refuse to participate in any parody of negotiations,” France24 reported. (RT)