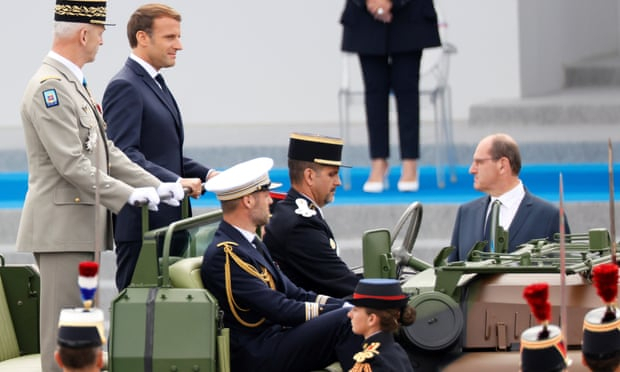 France’s annual Bastille Day military parade along the Champs Élysées is being replaced this year by a scaled-down ceremony as the country honours the healthcare and other essential workers bringing it through the coronavirus crisis.

President Emmanuel Macron will also address the nation in a television interview, setting out the key policy priorities of his long-term plan to relaunch France’s stricken economy, with less than two years to go before he runs for re-election.

The struggle against the virus, which had claimed more than 30,000 lives in France, will be the main focus of the celebrations, held every year to mark the storming of the Bastille fortress and prison on 14 July 1789 that launched the French Revolution.

For the first time since the end of the second world war, there will be no grand military march, with just 2,000 soldiers – half the usual number – gathering at the Place de la Concorde in central Paris for a truncated parade.

The ceremony is closed to the public to avoid contagion risks, with only 2,500 physically distanced guests on viewing stands to see a handful of tanks and other military vehicles on display and hear a military band play the Marseillaise.

Unlike other years, the guests are not world leaders and dignitaries but nurses, doctors, ambulance drivers, supermarket and care home workers, mask-makers and lab technicians who kept France going during its strict nationwide lockdown, along with families of medical workers who died from Covid-19.

“Exceptionally, this year, our armies … will cede the primary place to the women and men in hospital coats who fought the virus and who remain ramparts in the crisis,” Macron said, also praising the French army for building a field hospital.

Representatives of Germany, Switzerland, Austria and Luxembourg have been invited to thank the countries for taking in 161 French patients in a critical condition.

The French airforce’s Patrouille de France display team will perform its traditional flyovers, trailing blue, white and red smoke over the Arc de Triomphe and Champs Élysées, accompanied this year by an A400M transport plane and helicopters used to evacuate coronavirus patients from hospitals overwhelmed at the height of the crisis.

Macron’s aides have said he will also use the occasion to honour Charles de Gaulle 50 years after the general’s death and on the 80th anniversary of his celebrated call, broadcast from London by the BBC on 18 June 1940, to resist the Nazi occupation.

The annual fireworks display over the Eiffel Tower will this year also largely be destined for TV viewers as Paris authorities have closed off large parts of the city centre to crowds, including the banks of the Seine and other areas where people generally gather to celebrate Bastille Day.

Macron halted the ritual of the 14 July presidential interview when he took office in 2017, saying he wanted to stop “politics as usual”, but his new government, headed by a hands-on technocrat, Jean Castex, is under pressure to show how it will reboot the economy amid a recession forecast to destroy hundreds of thousands of jobs.

Élysée officials said the president would address the health crisis as well as several measures to revive economic growth as well as setting other priorities for the remainder of his presidential term.