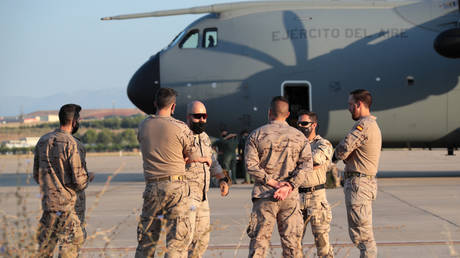 The incident at the Torrejon facility near Madrid is reportedly the third explosive device discovered in the country this week FILE PHOTO. Military personnel next to a Spanish Air Force Airbus A400M aircraft at the Torrejon de Ardoz air base. © Handout / La Moncloa via AFP

Security agents have intercepted a parcel bomb sent to the Torrejon Air Base in Spain, the military section of the Madrid–Torrejon Airport serving the capital, local media have reported. Two similar incidents happened earlier in the week at the Ukrainian embassy and a defense contractor in Zaragoza.

The device detected on Thursday was found during screening at the air base, the media said. No injuries or damage were reported.

On Wednesday, a Ukrainian embassy worker was lightly injured while handling the first of the packages. According to Spanish media, it was addressed to the ambassador and contained a small pyrotechnic charge.

Another letter bomb was sent to the arms producer Instalaza, in the city of Zaragoza in northern Spain. The firm produces military hardware, such as grenade launchers and night-vision goggles.

The device was disposed of in a controlled explosion after the premises were evacuated. Instalaza is said to be involved in the Spanish military assistance program for Ukraine, and the package was reportedly sent from there. (RT)