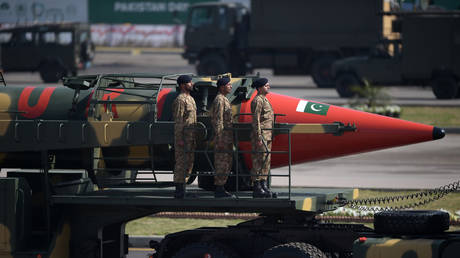 Asked in an Al Jazeera interview to set the record straight on whether Pakistan would hit India with nuclear weapons in case of a large-scale conflict, Khan began with the disclaimer that he would never be the one to attack.

“Pakistan would never start a war, and I am clear: I am a pacifist. I am anti-war,” he said.

However, the prime minister quickly added that when two nuclear-armed states “fight a conventional war, there is every possibility that it is going to end up into nuclear war.” And while he described it as “unthinkable,” his next hint sent a clear message about what Pakistan may do if it’s losing a conventional war against India.

“If say Pakistan, God forbid, we are fighting a conventional war, we are losing, and if a country is stuck between the choice: either you surrender or you fight ‘til death for your freedom – I know Pakistanis will fight to death for their freedom.”

So when a nuclear-armed country fights to the end, to the death, it has consequences.

Khan has repeatedly warned in recent weeks that the standoff between India and Pakistan over disputed Kashmir risks spiraling into a nuclear conflict unless foreign powers intervene, along with the UN. There has also been some confusion in the media about Pakistan’s nuclear strategy.

Peaceful rallies have given way to a third night of arson, looting and vandalism in…

Cop26 climate talks in Glasgow will be delayed by a year, UN confirms

Spain will open gradually to tourism, with Europe first

Spain will open gradually to tourism this summer, starting with European countries, and will ensure…

Trump, Macron agree G7 should be held in person and in near future: White House