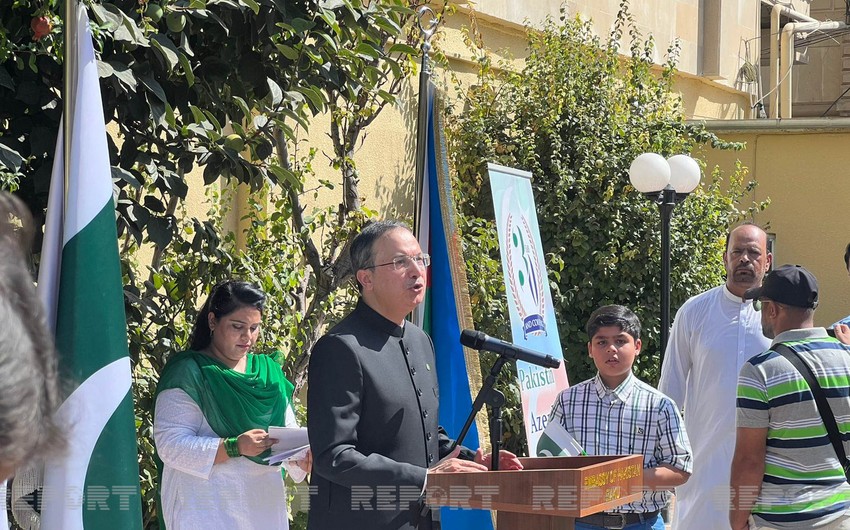 The Pakistani Embassy in Baku has celebrated the Independence Day of Pakistan, Report informs.

The event was attended by the Pakistani Ambassador to Azerbaijan, Bilal Hayee.

In honor of the 75th anniversary of independence, the flag of Pakistan was raised at the embassy, and letters from the President and Prime Minister of Pakistan were read out.

Bilal Hayee told reporters that relations between Azerbaijan and Pakistan are developing at the highest level, covering many areas and having a profound history.

“Azerbaijan always supports Pakistan, just like Pakistan supports Azerbaijan. Our country was one of the first to recognize the independence of Azerbaijan. I thank the Government of Azerbaijan for contributing to the development of bilateral relations,” he said.

The ambassador also spoke about the development of relations between the two countries in the tourism sector, adding that now there are four flights a week from Pakistan’s Karachi, Lahore and Islamabad cities to Azerbaijan, and more than 1,000 tourists from Pakistan visit Azerbaijan per week.

“Most often, they come to travel, but also to get acquainted with the business opportunities of Azerbaijan. This is a good sign for the development of the economic potential of the two countries,” the ambassador said.

“Azerbaijan strives to achieve stability, peace and prosperity in the region. There is no other alternative to peace. Peace is important not only for neighboring countries, but also for the entire region and international society,” Bilal Hayee noted.

This year also marks the 30th anniversary of the establishment of diplomatic relations between Azerbaijan and Pakistan.