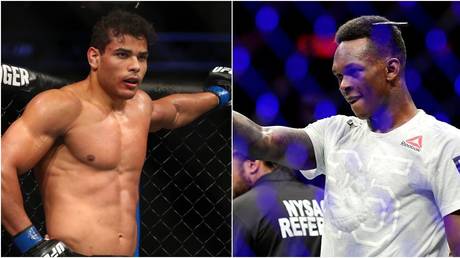 Adesanya won his UFC middleweight world title in October with an outstanding second-round knockout of Robert Whittaker. The fight took place in Melbourne, Australia and broke the company’s previous attendance record with 57,127.

As soon as Adesanya produced the knockout, he got up on the side of the Octagon fence and gestured towards Costa, who was in the crowd, eager to get onto the canvas to exchange words with his 185 pound rival.

It was thought that the two would fight next, with Costa having picked up a decision win over Yoel Romero at UFC 241 in August, but the Brazilian has since been ruled out of action for eight months with a bicep injury.

Also on rt.com ‘Best middleweight ever’: Fighters weigh in on Twitter after Israel Adesanya KOs Robert Whittaker at UFC 243

Despite all of that, and UFC president Dana White’s insistence that something else was being worked on for Adesanya’s next fight, a now-deleted tweet appeared on Costa’s account about his undefeated rival.

“Adesanya is afraid, into himself knows. He try looks good but everybody so skinny and fragile as him fell afraid to fight against powerful guys. P*ssy African!” the tweet read.

One fan replied to Costa with: “Haha wouldn’t recommend picking a fight with all of Africa.”

Costa quickly fired back with an even more aggressive response, also since-deleted, reading: “I wanna kill only 1 African. That skinny bigmouth.”

Adesanya has an array of opponents on the table he could fight next, including Romero, England’s Darren Till and Jared Cannonier.

The 30-year-old has spoken about all three and Adesanya wants to fight Romero next, according to White, even though he finds Cannonier the second-most dangerous middleweight in the division, behind himself of course.

“I think he’s the guy, the second most dangerous guy in the division behind myself. I look forward to fighting him after his next fight.”

But it was clearly his comments about Costa which got ‘Borrachinha’ heated on social media.

An eventual clash between Costa and Adesanya would not only be a battle for UFC middleweight supremacy, but also one between two undefeated stars of the sport, with the former’s record at 13-0, while the latter has 18 wins with no losses on his resume. (RT)