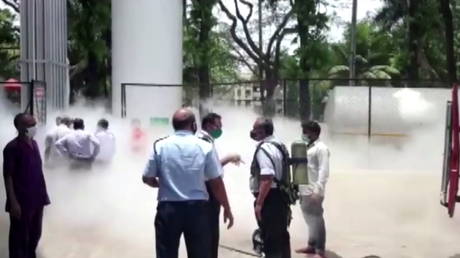 An oxygen tanker leaks at hospital premises where Covid-19 patients died due to lack of oxygen, Nashik, India April 21, 2021 ©  ANI via REUTERS

At least 22 people have died at a hospital in India’s western Maharashtra state after an oxygen leak caused a serious disruption to patient supplies, the region’s health minister has said.

Many Indian hospitals are already running short on oxygen supplies as the country battles a dramatic surge in Covid-19 infections, with a record 295,000 new cases and 2,000 deaths reported on Wednesday.

The leak occurred in the city of Nashik, which is among the areas in India hit hardest by the pandemic.

“Patients who were on ventilators at the hospital in Nashik have died,” Minister Rajesh Tope said in comments broadcast on Indian TV.

“The leakage was spotted at the tank supplying oxygen to these patients. The interrupted supply could be linked to the deaths of the patients in the hospital.” (RT)