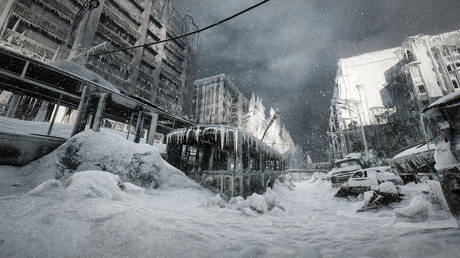 Even if we survived the initial bombing, most of humanity would starve to death in the aftermath Artist’s rendition of nuclear winter © Getty Images / Bulgac

In the aftermath of a nuclear war between the US and Russia, over 5 billion people could starve to death as the ash and soot from burning cities entered the atmosphere and blocked out sunlight, according to a study published on Monday in the journal Nature Food.

While much of the current speculation about nuclear war focuses on the horrors of the bombing itself, this study, conducted by researchers at Rutgers University in the US, suggests that the real suffering would come in the years after the conflict, when the breakdown of supply chains and devastation of local infrastructure would be compounded by the effect of a nuclear winter on food crops.

The cooling effect that would be created when the ash from a nuclear exchange entered the atmosphere would peak within a year or two, but the reduction in temperature would last for over a decade and would also involve reduced precipitation, according to the models used by the researchers. Fluctuations in major food sources, including maize, rice, spring wheat, and soybeans, as well as livestock pasture and fisheries, were all factored into the model. (RT)

Romania reiterates advice for citizens to avoid travel to Russia