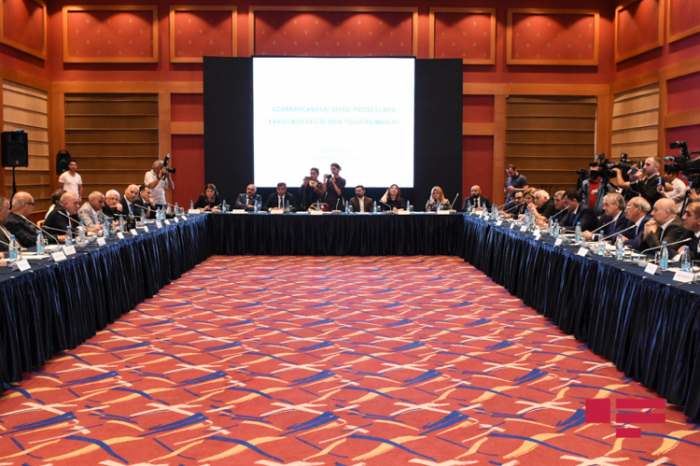 A Statement was approved at the round table on the theme of “Inadmissibility of foreign intervention in political processes in Azerbaijan”.

It is said in the statement adopted in the event with the participation of the several political parties, non-governmental organizations, media representatives and independent political experts: “We, the participants of round table on the issue of “Inadmissibility of foreign intervention in political processes in Azerbaijan”, representatives of political parties and civil society, media chiefs, and independent political experts, by comprehensively discussing complicated and sensitive processes happening in the international sphere as well as in the region, real opportunities and perspectives, and due to further strengthening of the independence of Azerbaijan, as well as statehood principles, ensuring territorial integrity, complete establishing of our national solidarity on the fateful issues, improving living standards of our population, and reinforcing economic and military potential, reputation in international sphere and impact opportunities of our country, state that:

Read more:   US Ambassador to Azerbaijan: I will work to strengthen all aspects of our cooperation

– Support government’s determined the position in the Nagorno-Karabakh conflict arose from Armenia’s aggression against Azerbaijan, and state that we unambiguously defend government’s all steps, including military means, aimed at releasing occupied Azerbaijani territories in a short period of time;

– Express necessity of comprehensive and unambiguous support of all citizens to army building and armed forces, regardless of their political affiliation;

– Consider important to deepen and make the reforms, carried out in the country, consecutive and regular;

-Taking into consideration necessity of joint activity towards peace and national solidarity, we call to follow ethic norms in political struggle, not to act against national and moral values, as well as to create regular dialogue environment, and not to disseminate any insulting information, libel, and rumors in social network and mass media.

– Especially stress any outside intervention contrary to international law in the election process of the country is unacceptable and state that we think the joint action is essential against such interference attempts.”