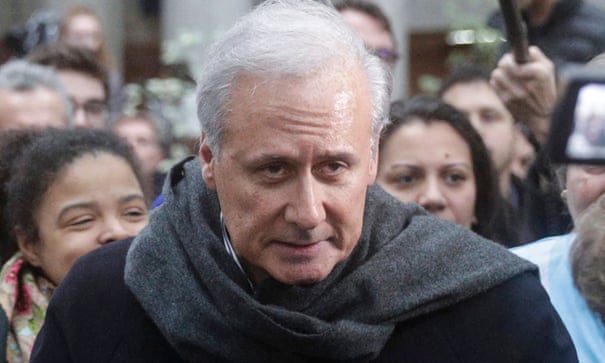 Feminist groups have expressed outrage that a French mayor jailed for rape is still being allowed to run his town from his prison cell.

Georges Tron, who once served as a junior minister under Nicolas Sarkozy, was jailed in February for the rape and sexual assault of a junior staff member at his town hall in Draveil, south of Paris.

The 63-year-old mayor was given a five-year prison sentence, two years of which were suspended, with the court citing the “moral constraint” he held over the employee in a subordinate role. He denied the charges and has lodged an appeal with France’s highest court.

From his prison cell, Tron has refused to give up his job as mayor and continues to run the town of 30,000 people, communicating with his team by letter and describing his incarceration simply as an “impediment”.

This week’s municipal council meeting opened with Tron’s team reading aloud a letter sent from his cell with instructions about the town’s budget. It provoked anger from opposition politicians.

Gabrielle Boeri-Charles, of the opposition group Transition Démocratique, Écologique et Sociale, said Tron no longer had the “moral authority” to run the town.

In the street outside the meeting, feminist groups protested with a mock-up of Tron behind bars. Demonstrators said his refusal to resign was “scandalous” and “revolting”.

An online petition by the feminist groups Osez le Féminisme and the European Association Against Violence Against Women at Work (AVFT) is calling on the government to issue a decree removing Tron from his post. They said it was “inconceivable” that a convicted and jailed rapist remain in charge of a town and local police force. Nous Toutes, a collective against violence against women, this week asked of the prime minister, Jean Castex: “What are you waiting for?”

The government has refused to take action. Last month, there was an explosive exchange in the senate when the Socialist senator Laurence Rossignol demanded the government remove Tron from his position. Éric Dupond-Moretti, the high-profile criminal defence lawyer who was appointed as justice minister by Emmanuel Macron last year, said the government could not act because an appeal was under way. He said it was “heresy” to suggest the government step in.

Rossignol pointed out that Dupond-Moretti had been Tron’s lawyer when the rape case first went to trial in 2018. She told the senate she could not believe the government had chosen Dupond-Moretti to reply, when as a lawyer he had accused women of lying and was “still doing so today” by arguing Tron should be presumed innocent during his appeal process. She said the government had the power to remove Tron but had failed to do so.

In a first trial in 2018, Tron was cleared of the rape and sexual assault of two female staff in 2007 and 2010. But an appeal trial in February this year upheld the accusations from one woman and jailed Tron.

After the guilty verdict in February, the town hall issued a press release on behalf of Tron, who said he was refusing to resign and from his cell would “fight to prove my innocence”.

The case had become a symbol of women in France speaking out against powerful politicians. The two women made complaints against Tron days after the French former International Monetary Fund head Dominique Strauss-Kahn was arrested over the alleged attempted rape of a New York hotel worker in May 2011. They said the allegations against Strauss-Kahn had emboldened them to speak out.

Despite the long-running case, many voters in Draveil stood by Tron in recent years, re-electing him mayor in 2020, for the fifth time since 1995.