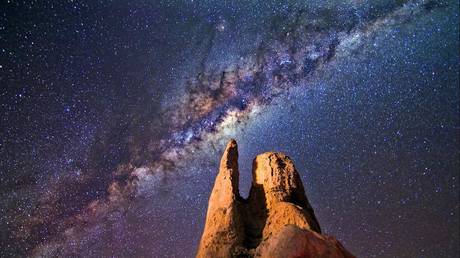 Approximately one billion years ago, the center of the Milky Way experienced a phenomenal period of starburst activity which produced the vast majority of stars in our galaxy, according to paradigm-shifting research.

Scientists now believe it was one of the most energetic periods in the Milky Way’s history, so rowdy in fact, that it may upend our current theories about star formation in our galactic backyard.

The galactic center is like the VIP section of the Milky Way night club, given that it’s so packed with stars, though admittedly most nightclubs don’t contain a supermassive black hole in the middle of the dance floor (it’s usually behind the bar).

The region, which spans just 490-light-years across, has continued forming stars in the past few tens of millions of years but now, after an “unprecedented” survey of the galactic center (the GALACTICNUCLEUS survey), researchers have found that it’s nothing like the good ole days and star formation hasn’t remained constant throughout the Milky Way’s history. Far from it, in fact.

Instead, researchers using the European Southern Observatory’s Very Large Telescope (VLT) found that roughly 90 percent of the stars in the galactic center were formed during the first half of the galaxy’s life, between eight and 13.4 billion years ago, back when MTV still played music. (RT)