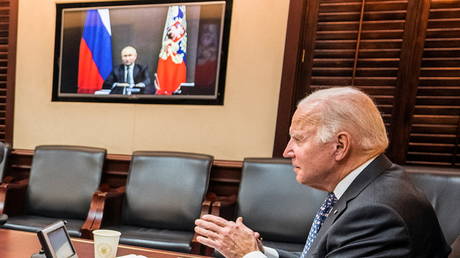 ©  The White House/Handout via REUTERS.

While Russian President Vladimir Putin apparently had his translator in a separate room during the “one-on-one” conversation with US President Joe Biden, the White House posted a photo showing that the American leader had company.

Putin and Biden spoke for just over two hours on Tuesday, discussing Ukraine, sanctions, nuclear weapons and other subjects. After the televised introduction, however, reporters were ushered out and the two leaders were expected to continue the video call one-on-one.

According to a Russia 1 channel correspondent reporting from the Kremlin, Putin had his interpreter sit in a separate room to adhere to “strictly one-on-one format” of the meeting.

Biden, however, had company. (RT)