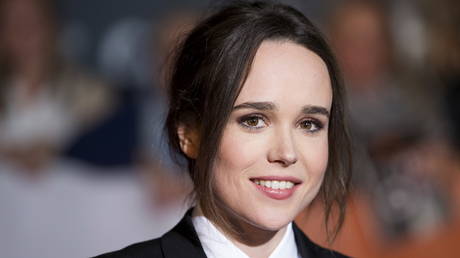 Page is shown arriving on the red carpet at the Toronto International Film Festival in 2015. © Reuters / Mark Blinch

Actress Ellen Page, who stars in the Netflix series ‘The Umbrella Academy’ and won an Oscar nomination for her role in the 2007 movie ‘Juno,’ has announced that she is transgender and has changed her name to Elliot Page.

“I can’t begin to express how remarkable it feels to finally love who I am enough to pursue my authentic self,” Page said on Tuesday in an Instagram post. “I’ve been endlessly inspired by so many in the trans community. Thank you for your courage, your generosity and ceaselessly working to make this world a more inclusive and compassionate place.”

Page, who had been praised for activism as an openly gay actress since 2014, now uses the pronoun “he,” but he’s reportedly non-binary, meaning he doesn’t identify as either a man or a woman.

The 33-year-old Canadian said that although he’s “profoundly happy” about declaring his transgender identity, he fears the invasiveness, hatred, jokes and violence that will likely follow.

“To the political leaders who work to criminalize trans health care and deny our right to exist, and to all of those with a massive platform who continue to spew hostility toward the trans community, you have blood on your hands,” Page said. “You unleash a fury of vile and demeaning rage that lands on the shoulders of the trans community.”

To the contrary, Page received accolades and support on social media, where an Instagram post received more than 1.2 million likes in its first five hours online. Twitter users threatened violence, jokingly or otherwise, against anyone who refers to Page by the wrong pronoun or by his former name. (RT)