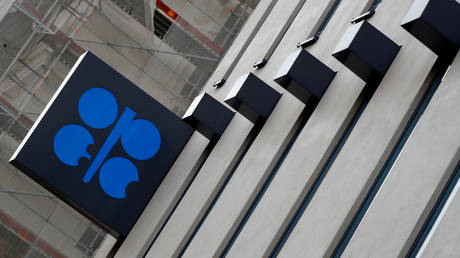 FILE PHOTO: The logo of the Organization of the Petroleum Exporting Countries (OPEC) © Reuters / Leonhard Foeger

Members of the Organization of Petroleum Exporting Countries (OPEC) and their allies led by Russia, known as OPEC+, may further hold back oil supplies amid concerns over demand.

The coalition is leaning towards maintaining crude oil production cuts at the current level of 7.7 million barrels per day (bpd) for another two or three months, the Wall Street Journal reported citing officials. Similar intentions were earlier reported by Reuters, who cited delegates and sources close to OPEC+.

The group is expected to hold informal talks on Sunday before making the final decision on the fate of production curbs at a ministerial gathering next week. The informal online meeting was reportedly requested by OPEC’s de-facto leader Saudi Arabia and one of the main non-OPEC parties of the deal, Russia.

Also on rt.com Will the United Arab Emirates withdraw from OPEC?

OPEC+ was scheduled to start adding 2 million barrels per day (bpd) to the market – about 2 percent of global consumption – in January, according to the next stage of their historic oil accord. Some of the largest crude suppliers, including Russia, earlier signaled that the cuts could be extended if necessary.

Read more:   Team Trump's Powell tells Fox host to do 'own investigation' when asked for evidence of tabulation tampering

This weekend’s unofficial meeting comes after oil prices secured gains for a fourth straight week. Despite edging lower on Friday, futures for West Texas Intermediate (WTI) were up eight percent over the week, while Brent rose more than seven percent. (RT)