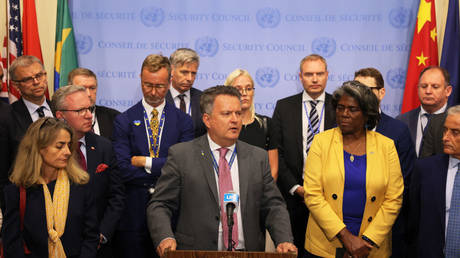 US and EU ambassadors backed Ukrainian envoy to the UN Sergey Kislitsa after a Security Council meeting on August 24, 2022 ©  Michael M. Santiago/Getty Images

International support for Ukraine has dropped dramatically since March US and EU ambassadors backed Ukrainian envoy to the UN Sergey Kislitsa after a Security Council meeting on August 24, 2022 © Michael M. Santiago/Getty Images

Ukraine’s latest proposal to condemn Russia has attracted the backing of just 58 out of 193 UN member states, a far cry from the number that symbolically supported Kiev in the General Assembly in March.

Kiev’s envoy to the UN Sergey Kislitsa heralded the proposed resolution on Wednesday, following the Security Council meeting convened on Ukraine’s independence day. The session featured a video address by President Vladimir Zelensky, for which the council had to override protocol requiring in-person appearances, and a series of statements by Western governments denouncing Russia.

Moscow’s envoy Vassily Nebenzia provided the counterpoint by introducing evidence of Ukrainian atrocities into the record and even naming Kiev’s western backers as accomplices in specific instances. 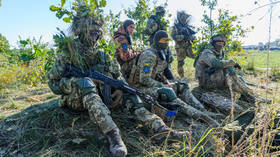 Kislitsa’s resolution also fell short of the support Kiev had back in March, right after the start of the Russian military operation. At the March 2 General Assembly session,141 member countries – or 73% of the UN – voted for a nonbinding resolution to condemn Moscow.

Read more:   Chelsea's head coach: We deserve to win a trophy in Baku

This week, however, that support stood at 30%, with no African, Persian Gulf or BRICS countries on board – and only two Latin American governments, Colombia and Guatemala, standing with Ukraine. (RT)