Protests are still ongoing in Minneapolis, MN, and beyond © KEREM YUCEL / AFP

Isra Hirsi, the combative daughter of Ilhan Omar, had to go on the defensive after she threw a spark into the powder keg of Twitter rage by sharing a call to resupply those rioting over the death of George Floyd in Minneapolis.

The 17-year-old, who describes herself as a “climate activist” and anti-capitalism warrior, couldn’t stand back during the massive riots in Minneapolis that broke out following the brutal police detention and death of George Floyd, a local African American man.

She has been extensively tweeting her outrage over police brutality and racial prejudice, supplementing her own messages with posts from other users.
One such retweet came from the account of the Twin Cities chapter of the Democratic Socialists of America (DSA), which asked anyone willing to help “comrades protesting at [Minneapolis] 3rd precinct” to donate “much-needed supplies.”

Read more:   Political upheaval in Venezuela: US 'ready' to send troops to Colombia

The list mentioned water, disinfectant liquids, first aid kits, and plywood for shields, as well as tennis rackets and hockey sticks, among other items.

Ilhan Omar’s daughter retweeted a list of needed supplies for “comrades” who are rioting in Minneapolis. The Twin Cities DSA asks for ply wood, sticks, rackets and more. pic.twitter.com/BFjXIQh8wE

Commentators who responded to the Twin Cities post itself were mostly advising on how to treat riot control agents, sometimes invoking the Hong Kong street warfare experience.

In stark contrast, the retweet by Hirsi sparked a furious online row on her page, with rival camps pulling no punches while unloading on their opponents. 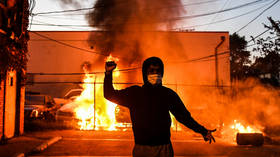 Some even argued that she was endorsing “terrorism” and deserved to be arrested, with one going so far as to suggest sending Hirsi and her mother, Congresswoman Ilhan Omar, “back to Somalia on a Blackhawk chopper.” Others accused Hirsi of applying “mind numbing” logic to “justify your senseless riots.”

Those who favored Hirsi sharing the DSA’s call of arms insisted that she was right to do so. “Since when was asking for defensive materials terrorism? Last I checked you right wingers just bring giant killing machines,” one pointed out. (RT)